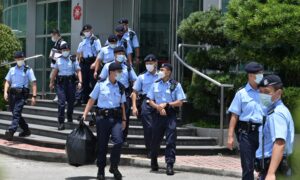 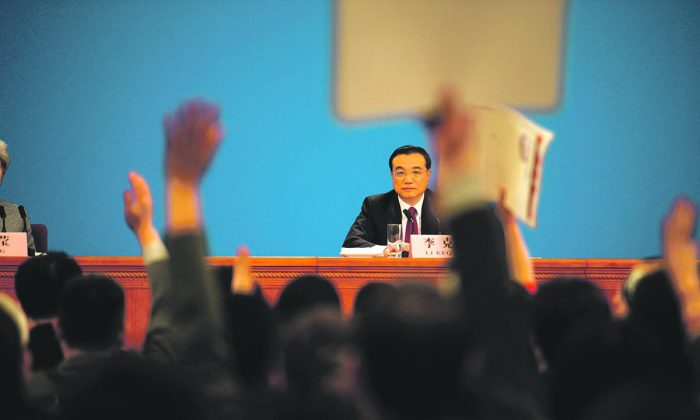 Chinese Premier Li Keqiang takes questions from journalists during the press conference after the closing session of the National People's Congress in the Great Hall of the People in Beijing on March 16, 2016. (Fred Dufour/AFP/Getty Images)
China

Strikes and protests over unpaid salaries broke out throughout mainland China during the period of the Two Sessions, the annual political meetings of the Chinese regime’s National People’s Congress (NPC) and Chinese People’s Political Consultative Conference (CPPCC).

The unrest was triggered by the slowing of China’s economy and the Chinese Communist Party’s (CCP) announcement that 1.8 million redundant workers in the coal and steel industries would be laid off.

During the Two Sessions, tens of thousands of angry employees from the state-owned Longmay Mining Group, the biggest coal enterprise in Heilongjiang Province, staged protests for several days over unpaid wages.

Around 1,000 workers of the largest steelworks in Jilin Province also rallied over unpaid salaries.

According to Hong Kong’s China Labour Bulletin’s statistics, Chinese workers’ strikes and protests in 2015 amounted to nearly 2,800, a figure twice as high as in 2014 and 14 times higher than in 2011. According to statistics, 704 group protests occurred in the first two months of 2016, exceeding the sum of all protests in 2013.

The Two Sessions officially closed on March 16. In the press conference, the regime’s Premier Li Keqiang answered some questions raised by overseas media.

Most of the questions focused on China’s economic risks and problems, such as how to maintain the economic growth rate of 6.5 percent and how to defuse the impact of the unemployment tide on society.

In the press conference, which lasted for more than two hours, nine Chinese media, six overseas media, and two Hong Kong and Taiwanese media had the opportunity to raise a question.

Reuters was selected to be the first one. A Reuters journalist asked Li Keqiang about the recent volatility in China’s stock and currency markets, which has drawn close attention from international investors.

Li replied, “You’ve had the first opportunity to ask a question, and you made your question all about the financial sector. … The truth is, the dysfunctional real economy presents the largest risk to the financial markets.”

Li said the government adopted a series of steps last year, including interest rate cuts and targeted reductions of banks’ reserve requirement ratio, but these were not quantitative easing measures. He said that financial institutions should support the real economy.

However, he added, “Last year, because of the difficulties of companies in some sectors, the nonperforming loan ratio of some financial institutions in China increased.”

The NPC approved the 13th Five-Year Plan, which set China’s economy growth target at around 6.5 percent. This is the first time since 1995 that the Chinese government has set the economic growth target at a range.

Li said it is impossible for him to agree that China cannot achieve the 6.5 percent GDP growth target this year. However, when a Bloomberg journalist asked him how to address concerns that the growth target and the desire to avoid potential layoffs would bind China’s hands, Li replied, “When you asked the question, you looked very serious, which made me feel a little heavy.”

Li said it is true that in some sectors there are serious problems of overcapacity, especially in heavy industries and petrochemical industries. In the past two years, up to 100 million tons of steelmaking capacity has been curbed, and some 1 million employees have been involved.

Li emphasized that the government will press ahead to deal with overcapacity and at the same time make sure that there will not be mass job losses. He stressed that the central government has established a fund of 100 billion yuan (approx. US$15.4 billion) to help workers resettle in new jobs.

He also acknowledged that the weak world recovery has taken its toll on the Chinese economy, which is deeply engaged in the world economy. He said that China’s economic transition is underway, its deep-rooted problems are emerging, and the downward pressure is indeed increasing.

During the period of the Two Sessions, Lu Hao, the Governor and the Deputy Secretary of the CCP of Heilongjiang Province, said, “Up until now, none of the 8,000 workers of Longmay have suffered any wage decreases or arrears.”

His remarks triggered the outbreak of protests and rallies in Shuangyashan City, where tens of thousands of miners from Longmay Mining Group, Northeastern China’s largest coal company, went to the streets to protest and even blocked railways.

On March 14, in front of the company building of Tonghua Iron and Steel Group Co., Ltd. (TISCO), the largest steelmaker in Jilin Province, around 1,000 workers rallied and protested against the arrears of wages and heating costs. The workers tried to break through the iron gate of the company. A large number of police were deployed to intervene.

On March 15, The New York Times published a front-page report stating that China’s economy is slowing after more than two decades of breakneck growth, and strikes and labour protests have erupted across the country.

Factories, mines, and other businesses are withholding wages and benefits, laying off staff, or shutting down altogether. Worried about their prospects in a gloomy job market, workers are fighting back with unusual ferocity.

The article stated, “The approach underlines the political dilemma that labour unrest poses for the Communist Party.”

“Governments are not swimming in money the way they used to be, and there’s less room to compromise,” Eli Friedman, a scholar at Cornell University who studies Chinese labour issues, said according to The New York Times.

In early March 2016, Reuters reported that two reliable, but anonymous, sources said that China plans to lay off 5 to 6 million workers in state-owned unproductive “zombie firms” in the next two or three years to help control pollution and industrial overcapacity.

This will be the Chinese government’s boldest retrenchment program in almost 20 years, according to Reuters.

Within the next three to five years, the government plans to cut as much as 500 million tons of surplus coal production, Reuters reported. Yin Weimin, China’s Minister of Human Resources and Social Security, told Reuters that China is expecting to lay off 1.8 million workers from the steel and coal industries.

Translated by Libei. Written in English by Sally Appert.