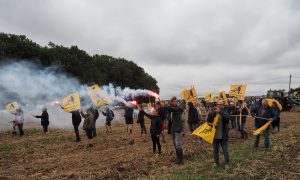 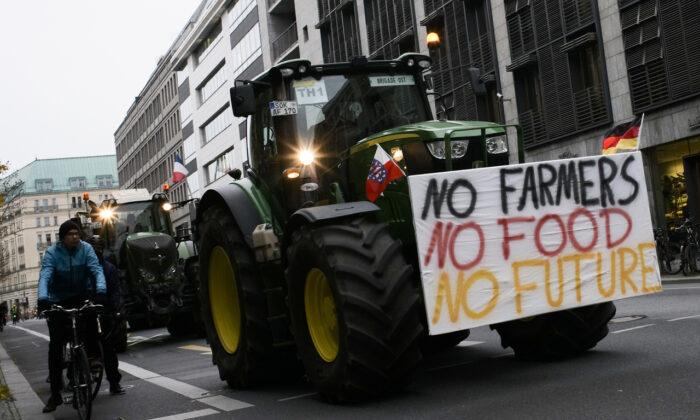 Farmers arrive for a protest at the government district in Berlin, Germany, on Nov. 26, 2019. (Markus Schreiber/AP)
World

Over 10,000 German farmers used around 5,000 tractors to bring central Berlin to a standstill on Tuesday. The farmers converged on the Brandenburg Gate near the German parliament to protest against German and European Union (EU) agricultural policies they say are driving them to ruin and leading young farmers to flee the land.

Many tractors had traveled in convoy for days to reach Berlin, with the first vehicles arriving in Berlin from nearby Brandenburg before dawn on Tuesday. Broad sections of the city were blocked by slow-moving convoys, with the farmers planning to cause further disruptions as they left the area during evening rush hour. Police in Brandenburg reported two traffic accidents caused by cars trying to overtake tractor convoys on the way to Berlin.

Farmer organizations claimed that new environmental restrictions planned by Germany’s Christian/Social Democratic coalition government are making it impossible for the country’s farmers to compete against imports from countries that do not observe similar controls. Many such countries can export their produce to EU countries like Germany. Farmers also vented their frustration at being blamed for any number of environmental problems, from animal welfare issues and nitrates in groundwater to climate change.

Low producer prices, red tape, and a population ever further removed from the land mean that farming in Germany has become considerably less attractive as a career. Furthermore, the clamor from powerful animal rights and environmental lobby groups in Germany regarding animal husbandry standards, the spreading of animal wastes and slurries on farmland, and methane emissions from ruminants have continued to grow, putting more pressure on farmers and agricultural systems.

A survey conducted in 2018 by the German Ministry of the Environment showed that 65 percent of Germans consider biodiversity loss to be “a very serious problem facing domestic agriculture,” with over 50 percent also concerned about pesticide use, groundwater and drinking water contamination by over-fertilization, and soil degradation due to monocultures.

There have even been reports (pdf) of schoolchildren from farming backgrounds being singled out by bullies because they come from farming families. President of the Rural Women’s Association of Wurttemberg-Hohenzollern, Juliane Vees, stated her belief that lessons at state schools are no longer neutral or balanced. According to a statement, biased teaching materials from non-governmental organizations (NGOs), erroneous information in textbooks, or one-sided opinions from teachers during school lessons can create negative attitudes toward farmers and their children. “If the teacher actually invites representatives of radical animal rights or animal welfare organizations to the school, the situation can become a problem for farmers’ children,” said Vees.

In September, German Chancellor Angela Merkel’s cabinet enacted a new Action Program for Insect Protection (pdf) “to reverse the trend of declining insect abundance and species diversity.” While the legally binding plan will free up funding to create and restore insect habitats and green belts in cities, it will also further restrict the use of pesticides and artificial fertilizers farmers say are essential for producing everything from fruit and vegetables to crops and animal feedstuffs—as well as vast quantities of corn, which digester plants all over Germany turn into biogas to fuel the country’s so-called “energy transition” to less carbon-intensive sources of energy.

Among the chemicals to be banned is glyphosate, the active ingredient in the herbicide Roundup.

According to the German Environment Minister, Svenja Schulze, “The action program provides us with a package of measures that lays out precisely what the German government will do to halt the decline in insect numbers and diversity. I am particularly glad that we will be able to better protect insects in agriculture as well: The German government will ban the use of glyphosate as early as European law allows, in 2023, and will significantly limit its use before that. It is at least as important for insect protection to also reduce the use of any other pesticides. We want to support everything that helps insects and avoid anything that harms them.”

According to figures from the German Department of Agriculture, approximately half of the country’s land is devoted to the production of food, with one farmer feeding around 150 people. “We have to feed people and, at the same time, manage our resources so that more people can be fed tomorrow,” said Germany’s Agriculture Minister, Julia Klöckner. “That is the requirement of modern agriculture. … But to do that, it needs support. We need to talk about how we can finance the additional services.”

Klöckner points out that the EU Commission won a water-quality lawsuit against Germany last year. Numerous EU monitoring stations in Germany still measure nitrate concentrations in groundwater above the permissible limit of 50 mg/liter. If the groundwater is not better protected against nitrate contamination from artificial fertilizers, she says, German taxpayers will face daily fines of up to $880,000, or around $330 million per year.

However, German farmers are insisting that they have not been consulted properly on changes that will have massive ramifications on their ability to stay in business.

The German Farmers’ Association President, Joachim Rukwied, was clear. “Agriculture in Germany needs support and a perspective for the future without over-regulation and prohibition policies,” he said in a joint statement (pdf). “A fundamental revision of the Action Program for Insect Protection is required. The question is not whether we do insect protection, but how: Cooperative nature conservation must be the way forward. This means that farmers, politicians and society must work together to find solutions for further improving nature and species conservation while maintaining the competitiveness of agricultural holdings. We want dialogue and we need concrete, practical results.”