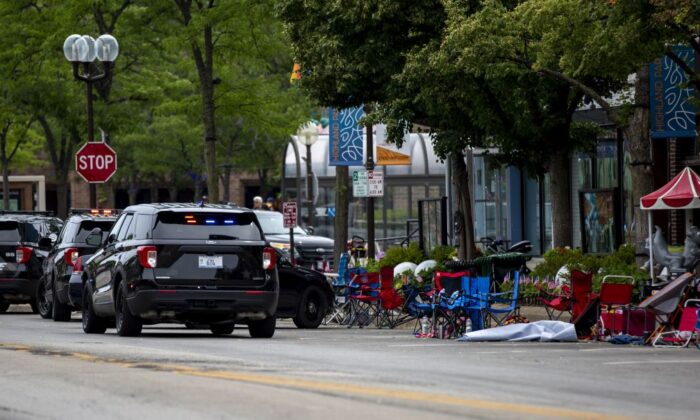 First responders work the scene of a shooting at a Fourth of July parade on July 4, 2022 in Highland Park, Illinois. ( Jim Vondruska/Getty Images)
Illinois

Multiple people are feared dead after a mass shooting during a Fourth of July parade in a Chicago suburb, officials said.

Six people were killed and at least 24 hospitalized in a parade in downtown Highland Park, officials told media outlets Monday.

“Numerous law enforcement officers are responding and have secured a perimeter around downtown Highland Park,” the statement said.

Witnesses told local media that crowds of people fled the scene after shots were heard.

The Lake County Sheriff’s Office confirmed that a shooting took place and told people to stay away. The office did not confirm the number of victims.

A video posted by a reporter showed people watching the parade before gunshots were heard, causing people to flee.

Highland Park Mayor Nancy Rotering wrote on Twitter that residents should avoid the downtown area, saying that there is a significant police response.

One witness, Miles Zaremski, told CNN that he heard 20 to 25 shots being fired. At least one person was seen bloodied on the ground, he said.

Rep. Brad Schneider (D-Ill.) confirmed that he was attending the parade at the time of the shooting, saying he’s safe. Schneider did not provide any other details.

“Today a shooter struck in Highland Park during the Independence Day parade. My campaign team and I were gathering at the start of the parade when the shooting started,” Schneider wrote in a Twitter post. “My team and I are safe and secure. We are monitoring the situation closely and in touch with the Mayor.”

Schneider said he heard that several people died in the incident. The lawmaker appeared to suggest more gun-control measures are needed.

“Hearing of loss of life and others injured,” the lawmaker added. “My condolences to the family and loved ones; my prayers for the injured and for my community; and my commitment to do everything I can to make our children, our towns, our nation safer. Enough is enough!”

Before the shooting, police in Chicago said that over the Fourth of July weekend, more than 50 people were shot, including nine fatally, across the city.