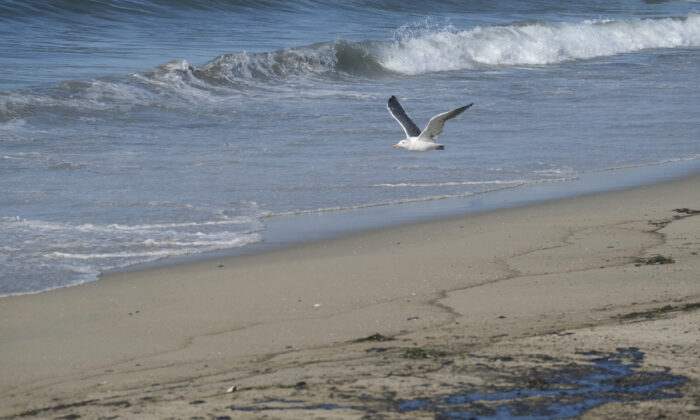 A seagull flies over oil washed up by the coast in Huntington Beach, Calif., on Oct. 3, 2021. (Ringo H.W. Chiu/AP Photo)
Environment

HUNTINGTON BEACH, Calif.—A 126,000-gallon oil spill from an offshore rig was causing major ecological damage in the waters off Huntington Beach in Southern California on Oct. 3, as officials closed the area to beachgoers and canceled the final day of the Pacific Airshow.

The U.S Coast Guard was leading the response to the spill, which covers about 5.8 nautical miles between the Huntington Beach Pier and Newport Beach. The spill emanated from a facility operated by Beta Offshore about five miles off the coast, and was likely caused by a pipeline leak.

Huntington Beach Mayor Kim Carr said the spill of 3,000 barrels worth of oil was reported at about 9 a.m. Saturday and drew a response from all levels of government, with a unified command established to handle the environmental crisis.

Carr described the situation as a “potential ecologic disaster,” and said some of the oil had reached the shore and was impacting the Talbert Marshlands and the Santa Ana River Trail.

“The spill has significantly affected Huntington Beach, with substantial ecological impacts occurring at the beach and at the Huntington Beach Wetlands,” a city statement said.

“It is imperative that the federal government assist in recovery efforts. Constituents who live along the shoreline are already reporting oil on the beach and strong odors,” Steel wrote. “Officials are already responding to protect sea life. Dead fish and birds are already being reported on beaches and shorelines. I have serious concerns about the environmental impacts of the spill and applaud the workers who are doing their best to prevent the oil from hitting sensitive wetlands.”

Skimming equipment and booms were deployed to prevent the inflow of oil into the Bolsa Chica Ecological Reserve and Huntington Beach Wetlands, although officials said wildlife in the two areas were already being affected.

The California Department of Fish & Wildlife set up the Oiled Wildlife Care Network hotline, at 877-823-6926, for people to call if they see wildlife impacted from the oil. Members of the public were urged not to approach any animals themselves.

The city also closed ocean access from the Huntington Beach Pier down to the Santa Ana River jetty.

Orange County Supervisor Katrina Foley—who represents the impacted cities of Newport Beach, Huntington Beach and Seal Beach—said Sunday morning that access to the beaches would be restricted too so officials could continue cleanup efforts.

Foley said the spill has already killed some fish and birds.

“Significant ecological impacts in HB. Oil has washed up now onto the HB beachfront. We’ve started to find dead birds & fish washing up on the shore,” Foley tweeted at 12:48 a.m. She added that the damage from the spill could be irreversible, calling the beaches and marshlands “part of our heritage” that draw countless numbers of people to the shore.

Oil also began to wash ashore in Newport Beach on Sunday. Health officials warned people not to swim, surf or exercise by the beach because of the potential health hazards. People were also urged not to fish in the area since the waters are considered toxic.

Boaters who incur any oil damage to their crafts were asked not to clean the boats themselves since they could spread the oil, but to contact county officials who could refer them to the proper channels for possible reimbursement of cleaning expenses.

Foley told KTLA5 that she was on a call Sunday morning with the mayor and city manager of Newport Beach and Huntington Beach, along with the Orange County Sheriff’s Department Harbor Patrol and the coordinators for the incident management team.

She said “softball-size clumps” of oil were seen on the Huntington Beach shoreline.

“The city fully acknowledges the gravity of the decision to cancel the final day of the iconic Pacific Airshow, and the disappointment that this decision will cause,” Huntington Beach officials said in a statement.

“However, the need for prompt and intensive intervention efforts requires complete and unfettered access to the marine environment.”

The unified command said the public was being asked to avoid any oiled areas. Trained spill response contractors were cleaning up the disaster.

“Public volunteers are not needed and could hinder response efforts,” they said.

The leak had not been completely stopped Sunday, but preliminary patching was completed to repair the oil spill site and repair efforts were ongoing.

“Workers moved to shut down the pipeline and used pressurized equipment to retrieve as much oil as possible soon after the incident was reported at 12:18 p.m.,” Kate Conrad of Beta Offshore told the Los Angeles Times.

The oil spill occurred in federal waters at the Elly platform, which was built in 1980 and processes crude oil from two other platforms that comes from a large reservoir called Beta Field.

Houston-based Amplify Energy Corp. is the parent company of Beta Offshore. Attempts to reach the company Sunday were unsuccessful.