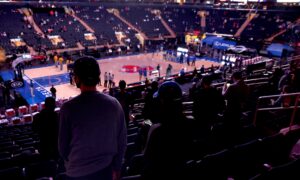 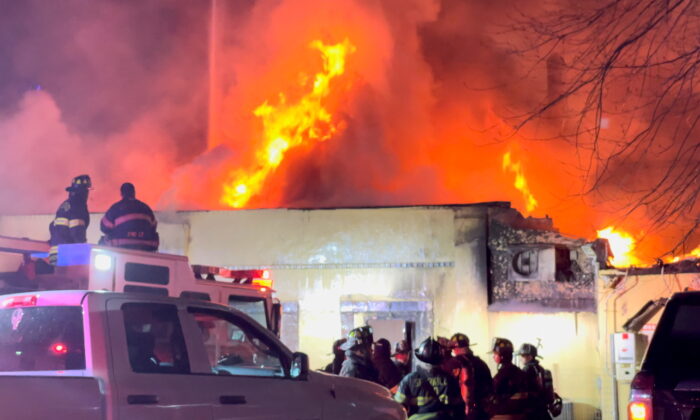 Firefighters work at a site of a fire that broke out at Evergreen Nursing Home in Spring Valley, N.Y., on March 23, 2021. (Screenshot/Benny Polatseck via Reuters)
NY News

A large fire broke out at a New York nursing home on Tuesday, leaving at least one person dead and forcing numerous residents to flee, officials said.

Fire officials said that between 100 and 125 people lived in the building, adding that 20 to 30 people had to be rescued. One resident died after being taken to the hospital, authorities added, saying that several other people are in serious condition. Two firefighters were hurt in the incident.

“We’ve got to start pulling it back, and peeling it layer by layer, and hopefully he’ll be recovered,” Rockland County fire and emergency director Chris Kea said, as reported by WNBC. He said an excavator was brought in to assist with debris removal.

Crews, meanwhile, are searching for a missing firefighter.

“There is always hope. He was a member of the Spring Valley Fire Department and he was one of the first on the scene,” said Kear to Fox5.

According to video footage of the blaze, several parts of the building appeared to collapse.

“There [were] plenty of Good Samaritans out here, probably eight of them, that literately ran into the building and [brought] them out in their wheelchairs, walkers, or literately picking them up and physically removing them out of the danger,” witness Hershy Green told the CBS affiliate. “Then watching their facility, their home going down in flames was something really traumatic,” Green added.

“They are safe and out of harms way,” another witness, Benny Polatseck, wrote on Twitter. He wrote that the seniors were taken to the Golden Acre Rest Home, which is nearby

The cause of the fire has not been announced yet. Other details about the incident were not provided.