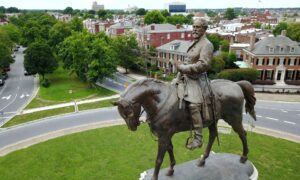 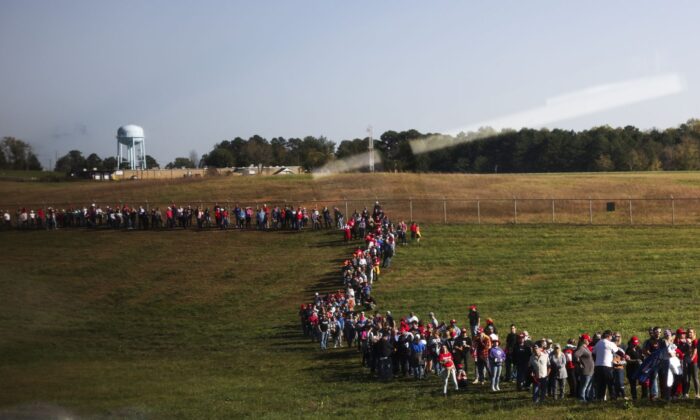 People wait in line to get into the Hickory Regional Airport to to see President Donald Trump speak at a rally in Hickory, N.C., on Nov. 1, 2020. (Michael Ciaglo/Getty Images)
Donald Trump

Supporters appeared to have lined up hours in advance for President Donald Trump’s rally in Hickory, North Carolina.

Video footage and photos uploaded by local reporters and Getty in North Carolina showed a long line stretching off into the distance.

One local reporter said the rally line was about a half-mile in length, while another noted it was “something to behold.”

The rally came ahead of voters heading to the polls to cast their ballots on Nov. 3.

Trump held numerous rallies over the weekend in battleground states, and he’s scheduled to hold four events on Monday. He held five on Sunday in Iowa, Michigan, Georgia, North Carolina, and Florida, and will hold events in North Carolina, Pennsylvania, and Wisconsin, and two in Michigan.

The Supreme Court declined to take up a challenge on Wednesday to North Carolina’s move to allow absentee ballots to be received and counted for up to nine days after voters go to the polls.

“Let me ask you, is there a better place to be anytime, anywhere than a Trump rally?” Trump asked a massive crowd Saturday in Butler, Pennsylvania. Tens of thousands of people appeared to have attended the rally in Butler County, prompting warnings from Democrats in the state.