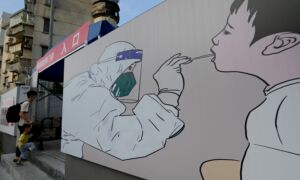 Flood waters discharged from rain-swelled reservoirs by authorities in China’s northeastern Jilin Province have apparently contributed to massive flooding and caused a large number of deaths, possibly in the thousands. Local residents say authorities didn’t announce the discharge in advance, and that entire villages were swept away. Authorities deny such claims.

On July 28 authorities in Yongji County, Jilin Province, began discharging water from the Chaoyang reservoir and several other reservoirs that had swelled due to record-high rainfall.

According to state media, over two meters (6.6 ft) of rain fell in Yongji County within 12 hours on the morning of July 28. Several towns in the county were deluged by a flood, and two small reservoirs were severely damaged and had to discharge.

Local residents disagree with official casualty counts and other statements made by officials.

Kouqian Town so far is among the worst hit areas, according to unofficial information available online and telephone interviews with residents. On Aug. 4, Mr. Ma, a resident, told The Epoch Times that authorities did not notify them in advance about the discharge, and that the flood quickly submerged all buildings lower than three stories tall.

Mr. Ma said, “Over 2,000 died in Xiada Village and Sijian Village alone. Not many survived. When I woke up at 7:10 a.m., the water was just above my ankles. The water then rose quickly. At 7:30 a.m., the government announced that flood water had been discharged from Chaoyang and several other reservoirs. The water merged and swept down.”

Asked why he thought that 2,000 people had died, Mr. Ma explained that each village had about 1,000 residents, so there should be about 2,000 people in the two villages, and there were very few survivors.

According to Mr. Ma, the two villages were severely flooded, the water level reaching up to three stories high, and most of the low-laying houses completely submerged.

“Many of the people [in Xiada and Sijian Villages] were swept away or buried in mud. People are now digging through the mud trying to find bodies,” Mr. Ma said.

An official, surnamed Zhao, from the Yongji County Emergency office, told The Epoch Times that flood discharge is a routine procedure.

“Everything is fine. People in every county and town knew about it,” Mr. Zhao said.

When asked about the death count he said he was not sure, they were still counting.

Official state media did not mention the Chaoyang reservoir’s discharge, but only mentioned that 284,700 people in the Yongji County have been affected by the flood, and that a large number of residential houses have been leveled. The report did not give an estimated death toll.

By Aug. 2, the official number of people who had died or were missing in the flood in the whole of Jilin Province was said to be 122.

One resident of Yongji County, who wished to remain anonymous for fear of retaliation, told The Epoch Times that the officials did not actually notify them before the discharge. After the flood, authorities declared through the media that “officials went to the villages to beg the residents to evacuate. However, residents refused to leave even when the officials kneeled down to beg them.” The resident said that this version of events was obviously fabricated.

Another villager in the county, who also declined to be identified, said that after the flood many areas began emitting the odor of decomposing bodies.

“After the flood, ten trucks were removing corpses from the old district of our town. With an estimate of about 60 bodies per truck, the number of dead taken away by the ten trucks could easily have been six hundred,” he said.

He indicated that disease may also be spreading. “Many of us have red bumps on our skin, and we do not know what caused it. The bumps on two people started to fester. We worry that it is some kind of plague. The authorities have not yet given us any explanation.”

Heavy rains and flooding have recently affected many areas in China.

Due to floodwater released from the Three Gorges Dam and torrential rains, the water level in the downstream Yangtze River, in Hubei Province, rose above the alert level along hundreds of miles of dikes on July 22, putting the Three Gorges dam’s flood-control function in question.

China Daily reported in June of last year that there are concerns that over 40 percent of the nation's reservoirs were unsafe.