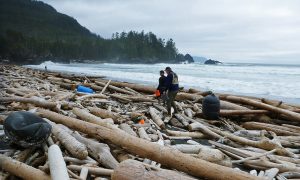 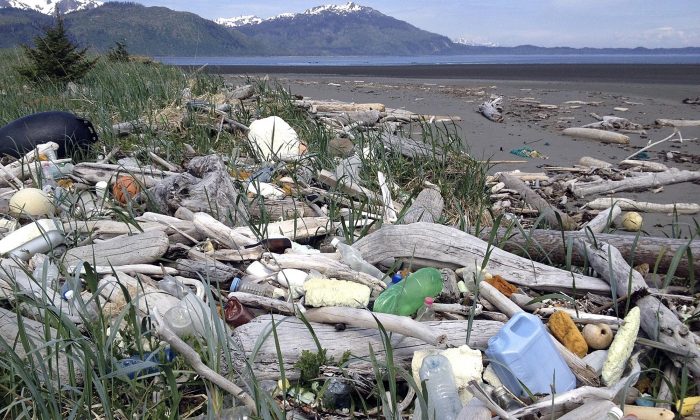 Massive Debris Removal Project to Get Underway in Alaska

JUNEAU, Alaska—A massive cleanup effort is getting underway in Alaska, with tons of marine debris—some likely sent to sea by the 2011 tsunami in Japan—set to be airlifted from rocky beaches and taken by barge for recycling and disposal in the Pacific Northwest.

Hundreds of heavy-duty bags of debris, collected in 2013 and 2014 and stockpiled at a storage site in Kodiak, also will be shipped out. The barge is scheduled to arrive in Kodiak by Thursday, July 16, before setting off on a roughly one-month venture.

The scope of the project, a year in the making, is virtually unheard of in Alaska. It was spurred, in part, by the mass of material that’s washed ashore—things like buoys, fishing lines, plastics, and fuel drums—and the high cost of shuttling small boatloads of debris from remote sites to port, said Chris Pallister, president of the cleanup organization Gulf of Alaska Keeper, which is coordinating the effort.

It’s like it never really goes away unless we get in there and actively remove it.
— Janna Stewart

Pallister estimates the cost of the barge project at up to $1.3 million, with the state contributing $900,000 from its share of the $5 million that Japan provided for parts of the United States affected by tsunami debris. Crews in British Columbia, Canada, will be able to add debris to the barge as it passes through, chipping in if they do. Pallister’s group has committed $100,000. Delays due to weather could drive up costs, which Pallister said is a concern.

Many of the project sites are remote and rugged. Crews working at sites like the Kayak and Montague islands in Prince William Sound, for example, get there by boat and sleep aboard. The need to keep moving down the shoreline as cleanup progresses, combined with terrain littered with boulders and logs, makes it tough to set up a camp, Pallister said. There’s also the issue of bears.

While relatively few people visit these sites, it’s important to clean them, Stewart said. Foam disintegrates, which can seep into salmon streams or be ingested by birds, she said. There’s concern, too, with the impact of broken-down plastic on marine life.

What’s not picked up can get swept back out, she said.

“It’s like it never really goes away unless we get in there and actively remove it,” Stewart said.

Alaska has more coastline than any other state. And Alaska cleanup operations often are expensive and dangerous, said Nikolai Maximenko, a senior researcher at the Hawaii-based International Pacific Research Center.

“Even without the tsunami, Alaska is well-known for being polluted with all these buoys and other stuff from fisheries activity and from other human activities,” he said.

It can be hard to definitively distinguish tsunami debris from the run-of-the-mill rubbish that has long fouled shorelines unless there are identifiable markings. But Pallister and others say the type and volume of debris that has washed up in Alaska has been different since the 2011 earthquake and tsunami, which killed thousands in Japan.

Tsunami Trash Island From Japan Tsunami Floating Toward US

Before the tsunami, a lot of old fishing gear would be on the beach. But afterward, the debris included an inundation of Styrofoam and urethane, Pallister said. Objects such as property stakes and crates used by fishermen in coastal Japan have also begun showing up, he said.

Crews plan to do cleanup work in the Gulf of Alaska this summer, which will add to the material that has already been cached in heavy-duty bags above the high-tide line. All this would be loaded onto the barge.

The logistics are complicated.

Dump trucks are expected to ferry the large white bags of debris from the Kodiak storage yard to the barge after it arrives. Tom Pogson of the Island Trails Network, which worked on the Kodiak-area debris removal project, said that will be the easy part.

In other locations, the bags will be airlifted by helicopter to the roughly football-field-sized barge, which Pallister expects will be “pretty maxxed out” when it is fully loaded.

Debris will be sorted for recycling in Seattle, with the remaining debris taken by train for disposal in Oregon, according to the state Department of Environmental Conservation.