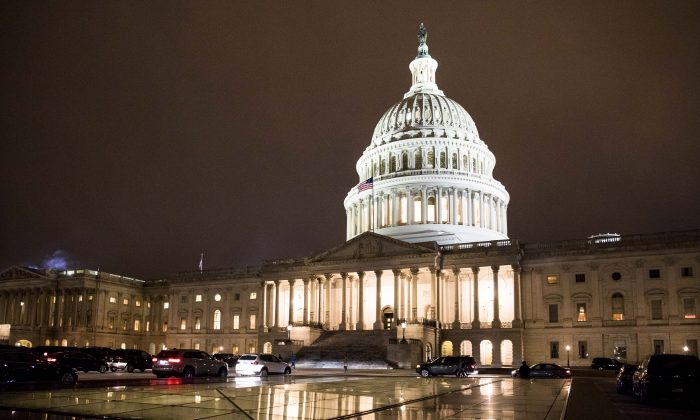 WASHINGTON—Fiscal conservatives think the federal spending bill, which President Donald Trump signed into law, is far from ideal and slam their Republican colleagues for selling out conservative beliefs by passing huge spending increases. In an effort to support fiscal discipline, Trump laid out his priorities in the 2018 and 2019 presidential budgets on Feb. 12 and asked Congress not to spend all the money from the budget deal.

A brief overnight government shutdown ended on Feb. 9, after Congress passed a two-year spending bill. The bill raised the budget caps by nearly $300 billion in the next two years and increased the debt ceiling. It is the second-largest spending increase in a decade. And the annual deficit is now projected to reach over $1 trillion next year, a deep concern for fiscal hawks.

Republicans claimed they were forced to approve the domestic spending hike since Democrats were willing to hold the military hostage.

Trump called the bill a “big victory” for the military but “much waste in order to get Dem votes,” in a tweet on Feb. 9.

“Without more Republicans in Congress, we were forced to increase spending on things we do not like or want in order to finally, after many years of depletion, take care of our Military,” he wrote in another tweet. “Sadly, we needed some Dem votes for passage. Must elect more Republicans in 2018 Election!”

Congress ignored Trump’s calls to slash federal spending a year ago. With a new spending deal now in place, they’re likely to do so again, according to media reports.

In March last year, the president called for a plan to reduce non-defense discretionary spending by $54 billion in 2018 to offset increases in defense spending. To reach a balanced budget within ten years, he had proposed to cut the non-defense spending by 2 percent each year. This plan would have reduced publicly held debt to 60 percent of GDP, the lowest level since 2010, according to the White House.

Today debt totals 77 percent of the economy, compared to 35 percent ten years ago, according to the Committee for a Responsible Federal Budget (CRFB), a bipartisan organization.

Fiscally irresponsible spending bills coupled with the great recession boosted the debt dramatically over the last decade, said the CRFB.

The budget deal increases the cap for defense spending by $165 billion and non-defense domestic spending by $131 billion over the next two years. The deal also includes nearly $90 billion in one-time disaster relief for the last year’s emergencies including hurricanes and wildfires.

The Senate passed the legislation by a bipartisan majority of 71-28 and hours later the House approved the bill on a vote of 240-186 on Feb 9.

Sixteen Republicans in the Senate and 67 in the House voted against the measure.

Sen. Rand Paul (R-Ky.) was the most prominent voice criticizing the budget deal, in a speech from the Senate floor late on Feb. 8.

“The hypocrisy hangs in the air and chokes anyone with a sense of decency or intellectual honesty,” said Paul.

Of the 67 House Republicans, the vast majority were fiscal conservatives who criticized their party members for handing a blank check to Democrats and hence acting like hypocrites.

The House Freedom Caucus, a congressional caucus consisting of conservative and libertarian Republican members voiced their objections to the budget plan.

“I want to pass a long-term budget and give our military, financial security,” Rep. Mark Meadows, (R-N.C.), chairman of the House Freedom Caucus wrote on Twitter on Feb.7.

“But bottom line: my constituents didn’t send me to Washington to grow the size of government by 13 percent. That’s not what we told the voters we would do.”

Many criticize the budget because it will lead to an increase in inflation. Cutting taxes and increasing spending at a time when the unemployment rate is at record lows could boost wages and consumer price inflation past the Fed’s comfort zone.

Right now, the Fed is signaling another one to two rate hikes this year but could add to that if inflation picks up markedly.

Either way, the new issuance of government debt without the Fed buying most of it has already boosted Treasury yields to almost 3 percent, with even higher rates to follow later this year.

Higher interest rates, be it in the form of longer-dated Treasury bonds or short-term Fed funds hurt private investment and longer-term economic growth.

The bill signed into law contains dozens of tax subsidies—also known as tax extenders—that had expired at the end of 2016. The deal reinstates these provisions through 2017, leaving their fate for the current year unknown, according to the Tax Foundation, an independent Washington policy group.

These tax incentives are the poster child for a dysfunctional tax code, according to Adam Michel, a policy analyst at the Heritage Foundation.

“A retroactive tax subsidy provides no incentive to invest in targeted technologies or locations,” Michel stated in a report. “Instead, retroactive tax incentives accrue as a one-time windfall to business owners and lobbyists.”

The budget deal reverses the principled stand Republicans have taken in the past on the importance of cutting the government spending and reducing the nation’s debt.  At the 2013 Conservative Political Action Conference Paul Ryan (R-Wis.) warned about mounting debt and called for a balanced budget.

“Our debt is a threat to this country,” Ryan said at the 2013 conference. “We have to tackle this problem before it tackles us.”

The critics now claim that Ryan, Senate Majority Leader Mitch McConnell, and the majority of the Republican Party members have turned 180 degrees from the deficit hawks who relentlessly rebelled over excessive spending and debt in the Obama era.

“This new stimulus of deficit spending will be as big as President Obama’s stimulus,” Paul said.

In an effort to embrace fiscal discipline, Trump proposed his budget plans for both fiscal years 2018 and 2019, three days after he signed the spending bill.

He called for cuts in domestic spending that would create $3 trillion in savings over the next ten years.

The Office of Management and Budget Director Mick Mulvaney introduced the President’s proposal during a press briefing at the White House on Feb. 12.

“No one can say the President doesn’t take this seriously,” said Mulvaney. “He is making some tough choices, but he’s doing it in a smart way that will still allow us to fund our priorities, to run the country, and to see tremendous economic growth.”

Mulvaney said the budget proposal delivered two primary messages to Congress. The first message is that Congress need not spend all of the money set by the budget deal, especially when it comes to non-defense spending. And if Congress is going to spend all the money, “this is how we would prefer to see you spend it,” he said.

The administration’s priorities for the fiscal years 2018 and 2019 include the military, infrastructure initiatives, border security, tackling opioids, IT modernization, and research and development.

The bill that passed only sets the spending caps, Mulvaney said. For the 2018 budget, Congress has to appropriate money for each program for the remainder of the fiscal year. So it needs to pass an omnibus spending bill with full appropriations before the next stopgap measure expires on Mar. 23, he reminded.

Trump’s domestic spending cut will most likely get rejected by lawmakers, including the majority of Republicans who previously turned down the similar cuts last year.

“Is this dead on arrival? … And the answer is absolutely not,” Mulvaney said.