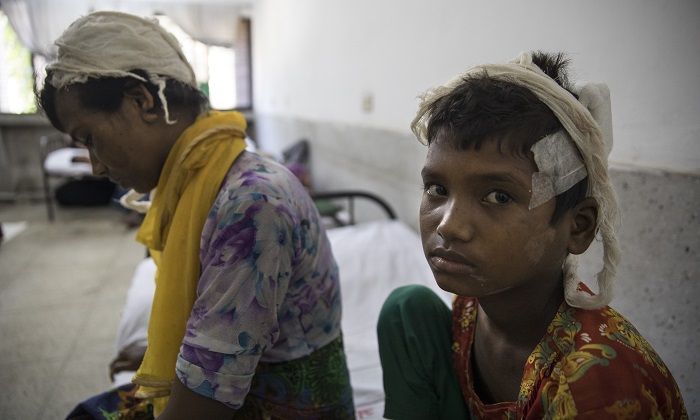 Rohingya Muslim refugee Dildar Begum, 30, recovers from her wounds alongside her daughter Nurkalima, 10, at a hospital in Cox's Bazar, Bangladesh on Sept. 15, 2017. Nearly 650,000 Rohingya refugees have fled into Bangladesh since late August during the outbreak of violence in the Burma's Rakhine State. (Paula Bronstein/Getty Images)
Asia & Pacific

Shawfika is a survivor of a massacre that occurred in Burma’s strife-torn Rakhine State on Aug. 30. The massacre occurred five days after an attack by the Arakan Rohingya Salvation Army (ARSA) on 30 Burmese security force outposts in Rakhine State.

The ARSA attack on Aug. 25 unleashed a horrific response from the Burmese military, with the ensuing violence, including reports of ethnic violence, affecting mostly civilians. Some 650,000 Rohingya have since sought refuge in neighboring Bangladesh.

In an interview with Human Rights Watch (HRW), Shawfika – a Rohingya Muslim woman – described what occurred when the village of Tula Toli was attacked by armed Burmese soldiers and ethnic Rakhine villagers.

Speaking from one of the refugee camps in neighboring Bangladesh, the 24-year-old said she witnessed her husband and father-in-law being killed.

“They just kept catching men, making them kneel down and killing them. Then they put their bodies on a pile,” Shawfika told HRW. “First, they shot them and if they were still alive, they were killed with machetes.… It took them one-and-a-half hours to carry all the bodies.”

With five other woman, Shawfika was then taken to a building by six soldiers who raped them, she said.

“Then they beat us, and when we were beaten down, they shot us. The shot missed me, and I pretended to be dead, and then I passed out. Then they left and put the house on fire,” she said.

“I woke up and realized I was in a pool of sticky blood. I tried to wake the others up but they didn’t move. Then I broke through the [bamboo] wall and escaped,” she said.

“When I escaped from the house, all the houses in the area were on fire. I could hear women screaming from some of the other houses. They could not escape from the fires.”

Shawfika was one of 18 survivors of the Tula Toli massacre which is detailed in a 30-page report by HRW “Massacre by the River: Burmese Army Crimes against Humanity in Tula Toli.”

The report documents how security forces trapped villagers in a Rohingya community along a riverbank and proceeded to kill and rape men, women, and children, and torch the village.

Hundreds were killed and 746 buildings in the village were destroyed, said the report.

During their investigation, HRW was told of how young children were pulled away from their mothers and killed, either thrown into fires or the river, or beaten, or knifed to death on the ground.

“The Burmese army’s atrocities at Tula Toli were not just brutal, they were systematic,” said Brad Adams, Asia director for HRW. “Soldiers carried out killings and rapes of hundreds of Rohingya with a cruel efficiency that could only come with advance planning.”

Anatomy of a massacre: @HRW's investigation of systematic rape and murder of hundreds of Rohingya in village of Tula Toli. https://t.co/QIAKfWkMZR pic.twitter.com/nLp80xel9f

The UN’s chief for human rights, Zeid Ra‘ad al-Hussein, has called Burmese security forces’ actions against the Rohingya as a “textbook example of ethnic cleansing.”

Earlier his month, Doctors Without Borders estimated that at least 6,700 Rohingya were killed in the first month of violence.

The Burmese military has denied accusations it has carried out atrocities and have blamed the crisis on ARSA, who they consider an Islamic terrorist group. ARSA emerged during the past year and is reportedly funded from Saudi Arabia and Pakistan.

After decades of oppression, Rohingya Muslims and Hindus have lived in Burma as non-citizens and still have severely restricted access to government services and employment opportunities. The Rohingya are not considered among the country’s 135 official ethnic groups.

Since the 2012 outbreak of communal violence, many Rohingya have lived in ghetto-like camps where their movement is restricted. Attaining information from the ground about the well-being of Rohingya and Rakhine civilians still in Rakhine State is still problematic, with the military having curtailed media access into the region.

The U.S. has called for Burma to “shine a spotlight on these accounts of ethnic cleansing.”

The U.N. has repeatedly called for access for independent investigators to enter the region on a fact-finding mission so that those responsible for the human rights atrocities can be held to account.

Extensive interviews have revealed that more than 6,700 #Rohingya people were murdered during widespread violence in #Myanmar. This horrifying number includes at least 730 children below the age of 5. Full report: https://t.co/mLH2vysatw #RohingyaCrisis pic.twitter.com/KHjpYOF9bA