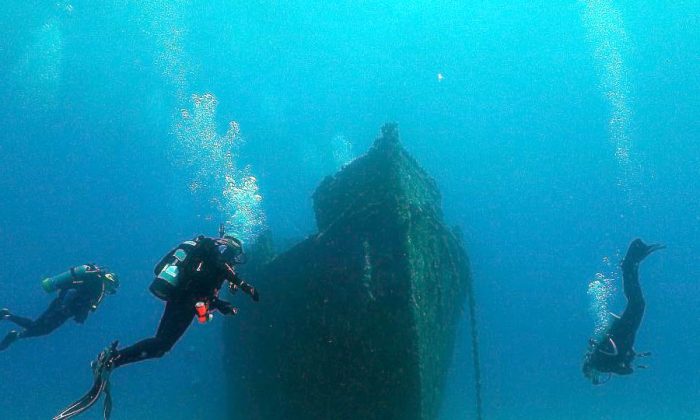 The 110' long Canadian built WW II tugboat was sunk as a memorial for Danny McCauley killed in a tragic automobile accident. His parents raised money to acquire and clean the derelict ship and Palm Beach County added funds to establish the reef in 75 feet of water. (John Christopher Fine)
News

Danny McCauley was just seventeen years old when the Jeep Wrangler he was
driving left the road and crashed into a wall and trees off Forest Hill
Boulevard at the entrance to Okeeheelee Park on February 22, 2012. Danny was
killed in the accident. One year to the day later his parents and friends saw a
ship laid down as an artificial reef in his honor in the Atlantic Ocean off
Palm Beach, Florida.

The Danny McCauley Memorial Reef is a World War II tug boat that was built in
Canada in 1944. The vessel had been derelict in the Miami River for 35 years
before Danny’s parents raised $10,000 and Palm Beach County contributed an
additional $25,000 to obtain the ship, clean it and convert it for sinking as
part of an artificial reef program. The shipwreck draws thousands of divers
every year. Christened ‘Pocahontas,’ the 110-foot long, 25-foot wide tug sits
upright on the bottom in 74-feet of water with its bow facing south.

The waters off Palm Beach are paradise for scuba divers. Reefs run parallel to
shore about a mile off the beach. The Gulf Stream, a predominantly northward
flowing current, sweeps in and gives divers the thrill of drift diving.
Sometimes there is no current, sometimes it can rip along at 4 knots.
Occasionally the Stream eddies and flows south. Large pelagic ocean dwellers
come into the Stream to feed. Smaller animals seek shelter in the reefs out of
the current.

The county artificial reef program has seen the use of concrete rubble and the
sinking of vessels to provide habitat for marine organisms. In the warm water
environment it doesn’t take long for corals and sponges to attach to these
underwater structures. While down only since February 22, 2013, the
‘Pocahontas,’ now renamed ‘Danny,’ is already home to myriad fish and marine
growth. The shipwreck has become a living reef, tribute to a young man who’s
passion was scuba diving and fishing.

Spearfishing on scuba is permitted in Florida. Many spearfishermen consider it
better sport to free dive with their spearguns. There are some that hunt only
to kill, to make money; those that destroy.

The proliferation of diver propulsion vehicles for spearfishing has made
killing fish underwater easy. One model has indentations along its sides. The
operator places the scooter between legs and rides it, speargun in hand. Even
with scuba, fish stand a chance of evading spearfishermen. Riding them down and
shooting them is like hunting from a vehicle or aircraft. That is not allowed
on land, why should it be allowed underwater? The animals have no chance. In
the case of divers that seek maximum kill, reef life is being wiped out.

Captain Jason Landau positioned ‘Little Deeper’ four hundred feet south of the
‘Danny.’ This would give his seventeen divers time to get to the bottom and let
the current drift them to the wreck. Once on site Captan Landau called down
from the bridge and divers jumped into the water. They had been briefed about
Danny and how the reef was created in his memory. The Gulf Stream was flowing
northward, running about a knot.

It was a beautiful day. The sun overhead glowed down on the shipwreck. Its
rays penetrated to the bottom. Visibility was sixty feet. The ‘Danny’ loomed
up, bow perfectly aligned, the vessel upright on the bottom.

Divers followed their guide. The plan was to tie the flag line attached to a
surface float to the shipwreck. This would allow divers from around the country
and some from overseas a chance to explore the wreck. That was not to be.
Crosses mark the site as a memorial. This day the crosses symbolized death as
men with spears riding a diver propulsion vehicle shot barracudas that lolled
over the shipwreck.

The man riding the fast underwater scooter held between his legs was
aggressive. There were two divers, three spearguns and the propulsion vehicle.
The underwater killers already had a large number of barracudas on stringers
attached to the top structure of ‘Danny.’ As a photo was taken, the spear
fisherman using the scooter pulled the diver away brusquely and pushed him
away. He clearly didn’t want pictures taken of their mayhem and was prepared to
use force to prevent it.

The diver loaded his speargun with the point facing in the direction of
tourist divers. It was a dangerous scene, one that pronounced death to as many
barracudas as the underwater killers could take.

‘Little Deeper’s’ divemaster could not tie off at the shipwreck site nor could
his tourist divers fully enjoy Danny McCauley’s Memorial Reef. It was turned
into a massacre, not a place of peace and tranquility those that placed the
shipwreck underwater hoped for.

Inspection of other shipwrecks off Palm Beach, part of the County’s artificial
reef program, revealed no barracudas or perhaps only a solitary fish.
Apparently hunters have systematically been killing them for commercial sale.
Barracudas become territorial on shipwrecks. They are seen to remain facing the
current swimming in place. They form squadrons and add special dimension to
underwater shipwrecks. Barracudas, as any experienced diver will know, are not
aggressive fish. They often pose for underwater pictures, teeth used to catch
prey ominous but harmless to divers underwater. Barracudas, like sharks, are
part of the marine ecosystem. Once they are wiped out on a shipwreck, as was
the case on the ‘Danny,’ and apparently on other of Palm Beach County’s
underwater shipwrecks, they do not return.

“These guys get $2.85 a pound for barracuda. Some fishermen use them as chum
to fish for sharks. Some are sold in fish markets,” an experienced diver aboard
‘Little Deeper’ said.

“One guy offered me $2.50 a pound to kill barracudas for him to use a chum,”
‘Little Deeper’s’ divemaster said. “He knew I was a divemaster and I knew the
sites where barracuda could be found. I didn’t want to do it. They are so
beautiful underwater,” he added.

“When I came up to the ‘Danny’ their boat was there but no dive flag was
displayed. As I pulled up to drop my divers they quickly put up a dive flag,”
Captain Landau said of the spearfishermen’s vessel. Flying a dive flag is
mandatory when divers are underwater in Florida.

The Florida Fish and Wildlife Commission (FWC) as well as Palm Beach County
can implement regulations that outlaw use of underwater scooters or propulsion
vehicles while spearfishing underwater. They can establish no kill zones around
shipwrecks that have been put down as artificial reefs. Such rules will be
difficult to enforce but with concerned scuba divers and responsible dive
operators, whose living is derived from tourist operations, it is akin to
reporting boaters that anchor on reefs and destroy coral.

Greed will always prevail over long term considerations for reef and ocean
conservation. A few will always poach and profit from activities that damage
the underwater environment. Divers that travel to many Caribbean nations report
no fish to be seen on their reefs. Years of overfishing has resulted in
decimation of fish populations. In some places there are no conch and coral has
been taken for sale to aquariums and shell shops destroying reefs. Years of
over harvesting of ocean species has now resulted in federal regulations
closing seasons and preventing catch of certain species.

A solitary Goliath grouper watched the mayhem off the side of ‘Danny.’ There
are lobbies already before the Florida legislature to open the season for
taking Goliath groupers. The fish were nearly hunted to extinction. It required
25 years for a fish to grow to those proportions; much longer to achieve the
size of the Goliath that was swimming off the ‘Danny.’ It would require a spear
fisherman on his scooter seconds to kill it. The man would cash the dead fish
in an have enough to buy beer for a couple of days. Florida would lose a dive
tourist industry that keeps hotel rooms occupied, restaurants at capacity, dive
stores operating and diver operators profitable.

The massacre at the Danny McCauley Memorial Reef is one example of many that
Florida’s legislature must take into consideration in directing FWC mandates in
regulation and enforcement. Clearly moral integrity will not alone prevent
desecration of hallowed places in the ocean.