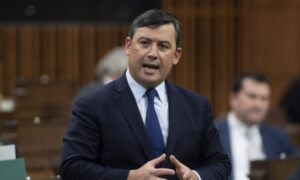 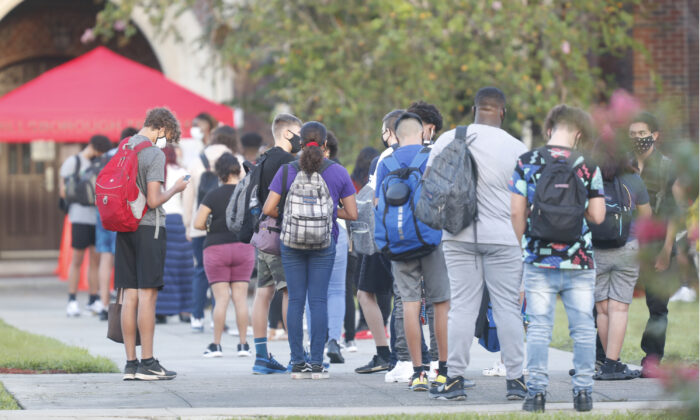 High school students wait in line to have temperature checked before entering campus in a file photo. (Octavio Jones/Getty Images)
US News

A public school district in Massachusetts is encouraging its students and staff to report on one another for “incidents of bias,” according to newly uncovered documents.

The documents include Wellesley Public Schools’ (WPS) guidelines (pdf) on how to handle complaints of bias among students and staff, and slides from a mandatory “equity protocols” training course. They were obtained and released by Parents Defending Education (PDE), which describes itself as a grassroots organization working to reclaim schools from “activists promoting harmful agendas.”

According to Wellesley’s Office of Diversity, Equity, and Inclusion, a “bias incident” is any “conduct, speech or expression that has an impact but may not involve criminal action, but demonstrates conscious or unconscious bias” against any federally protected identity group, i.e., “race, ethnicity, national origin, sex, gender identity or expression, sexual orientation, religion, or disability.”

Students are encouraged to report incidents of discrimination or “any concerning pattern of biased behavior” to any district staff member or a trusted adult. Reports may be also be made anonymously online, according to the policy, although it notes that anonymous reports are “more difficult to investigate and respond to.”

The “equity protocols” training slides give examples of “microaggressions,” including telling a colleague “You’re so articulate,” saying “The way you’ve overcome your disability is so inspiring!,” mispronouncing someone’s name, or referring to the CCP (Chinese Communist Party) virus, which causes the COVID-19 disease, as the “China virus.”

The slides also teach that “telling rude jokes” on social media is an example of a “bias-based incident,” as are using slurs, imitating someone with a disability, or imitating someone’s cultural norms or language. Those incidents should be reported even if they happen off-campus, according to the protocol, as long as they impact the school or work environment.

Students, staff, and even community members may face punishment if they violate the guidelines. Potential discipline for students include detention and suspension, while staff members would undergo a process of “formal warnings and reprimands, suspension, or more serious consequences.” Non-staff adult community members may be “sanctioned by limiting or ending their participation in WPS community activities or ending their ability to be on WPS premises.”

Nicole Neily, the president and founder of PDE, warned in an op-ed that anti-bias policies in public schools are being weaponized against constitutionally protected discussion on potentially controversial topics.

“Students absorb more in school than simply lesson plans; they’re also learning how to interact with individuals who come from different backgrounds and viewpoints,” Neily wrote. “Bias response teams send a clear message not only that certain opinions are wrong but that the correct coping method, when confronted with such a situation, is to ‘go tell the grownups.'”