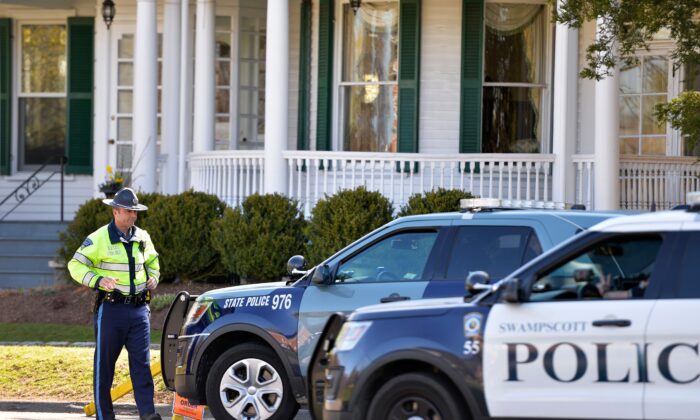 A state police officer stands guard outside the home of Massachusetts Governor Charlie Baker during a "Liberate Massachusetts" rally in Swampscott on April 23, 2020. (Joseph Prezioso/AFP via Getty Images)
Vaccines & Safety

The State Police Association of Massachusetts has called upon a judge to suspend the state’s COVID-19 vaccine mandate for troopers.

The state police union filed a lawsuit against the Commonwealth last Friday, seeking an injunctive relief prohibiting the state from implementing its vaccine mandate without bargaining with the union.

The complaint (pdf) claimed that the mandate would cause the union and its members “foreseeable, immediate harm,” which includes the impacts of vaccinations, potential side effects, and subjecting troopers to discipline up to termination.

On Aug. 19, Gov. Charlie Baker issued an executive order, stating that all executive department employees must demonstrate by Oct. 17 that they are fully vaccinated against COVID-19, a disease caused by the CCP virus, commonly known as the novel coronavirus.

Violators will be subject to “disciplinary up to and including termination,” reads the executive order, which will affect 44,000 executive state employees.

During Wednesday’s hearing, Paul Hynes, an attorney representing the police union, told the judge that the Oct. 17 deadline was arbitrary and made bargaining impossible.

He said that because of the timing required between shots, unvaccinated troopers would need to schedule their first of the two-dose Pfizer vaccine by Sunday to comply.

About 20 percent of troopers are not yet vaccinated, Hynes said. The police union represents about 1,800 troopers in the state.

Jennifer Greaney, an attorney for the Commonwealth, said the state should have the authority to set up a deadline, CBS Boston reported.

“There has to be situations where there is an ability of the government, in an exigency such as the COVID-19 pandemic, to have a deadline of implementation of policy,” said Greaney.

She also argued that troopers could get the one-dose Johnson & Johnson vaccine to comply by the deadline.

The union negotiated with the state in August, wanting their members who’ve recovered from COVID-19 or who choose not to get the vaccine for either medical, religious, or personal reasons to be able to take a weekly test and wear a mask at work, the complaint shows.

The union also requested “presumptive protection” for its members. If a trooper becomes ill or dies from COVID-19 or the vaccine, that would be “considered a line-of-duty injury.”

In a press conference Wednesday, Baker said that the mandate is intended to protect the public, and he expects the lawsuit to be resolved amicably.

A union representing prison guards and other corrections officials in Massachusetts also threatened its own legal action against the vaccine mandate, WBUR reported.