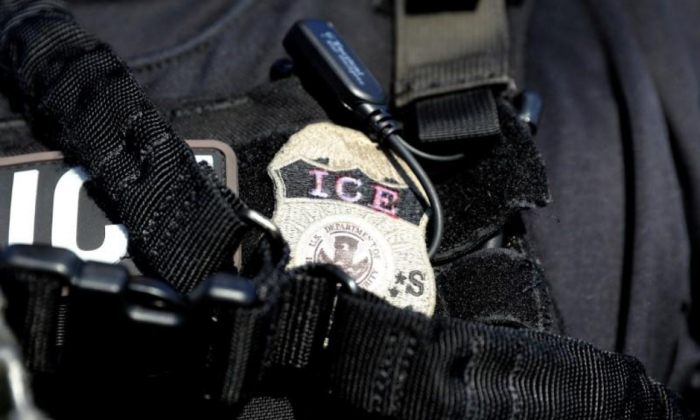 FILE PHOTO: The badge of a U.S. Immigration and Customs Enforcement's (ICE) Fugitive Operations team is seen in Santa Ana, California, U.S., May 11, 2017. (Lucy Nicholson/Reuters)
US

The decision makes Massachusetts the first state in the nation to legally enshrine a sanctuary policy for illegal immigrants statewide, according to the state’s attorney general.

It also amounts to a rejection of requests from the Immigration and Customs Enforcement (ICE) agency that ask courts and police nationwide to hold illegal immigrants, who would otherwise be released, for up to 48 hours for federal authorities to detain them. Complying with ICE, according to the Supreme Judicial Court, would amount to an unauthorized arrest.

President Donald Trump made cracking down on illegal immigration one of his core campaign promises. Since taking office, he has given ICE his full support. The agency recently announced that it will be hiring 10,000 additional agents.

ICE has long criticized cities nationwide that refuse to cooperate with the agency as it enforces federal laws against illegal immigration. Thomas Homan, the acting director of ICE, recently announced that the agency will send more agents and resources to sanctuary cities to step up enforcement.

“While ICE is currently reviewing this decision to determine next steps, this ruling weakens local law enforcement agencies’ ability to protect their communities,” a field office director with ICE in Boston told ABC7.

“The dedicated men and women of ICE will continue to do our sworn duty to enforce our immigration laws and protect the safety and security of the citizens of Massachusetts’ communities,” he said.

The Massachusetts case was brought to court by Sreynuon Lunn from Cambodia, an illegal immigrant with a history of criminal convictions. He was ordered to be deported in 2008, but Cambodia would not accept him so he was released.

Lunn was arrested again in February 2016 on a charge of armed robbery in Boston, but the case was dismissed when he appeared in court in February 2017. In the court case, Lunn complained that a court officer in Boston detained him for ICE agents.

“Massachusetts law provides no authority for Massachusetts court officers to arrest and hold an individual solely on the basis of a federal civil immigration detainer, beyond the time that the individual would otherwise be entitled to be released from state custody,” the court decision states, according to Reuters.