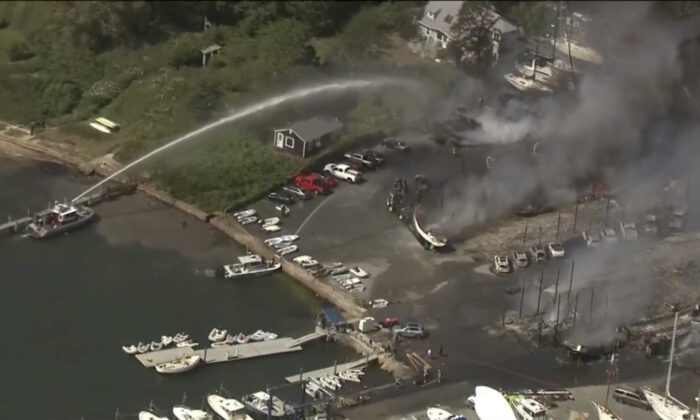 Crews battle a massive fire that has destroyed buildings, cars, and vessels at a boat yard in Mattapoisett, Mass., on Aug. 19, 2022. (WCVB via AP)
US News

MATTAPOISETT, Mass.—Gasoline vapors ignited by spark during a gas tank replacement project on a boat was the likely cause of a major fire at a Massachusetts marina last week that destroyed buildings, vehicles and boats and sent one employee to the hospital, investigators said.

The fire at the Mattapoisett Boatyard on Friday that drew more than 100 firefighters and sent a plume of thick black smoke over southeastern Massachusetts that could be seen for miles was determined to be accidental, according to a statement Monday from the state fire marshal and local authorities.

The investigation determined that the fire began inside a building at the boatyard where a worker had been replacing a boat’s gas tank.

The fire, fanned by winds of up to 25 mph, spread to six buildings, 47 vehicles and 14 boats, authorities said.

The injured worker remains in the hospital but is expected to survive. Three firefighters who suffered smoke inhalation and heat exhaustion injuries were treated at the hospital and released.

Mattapoisett is about 50 miles south of Boston.