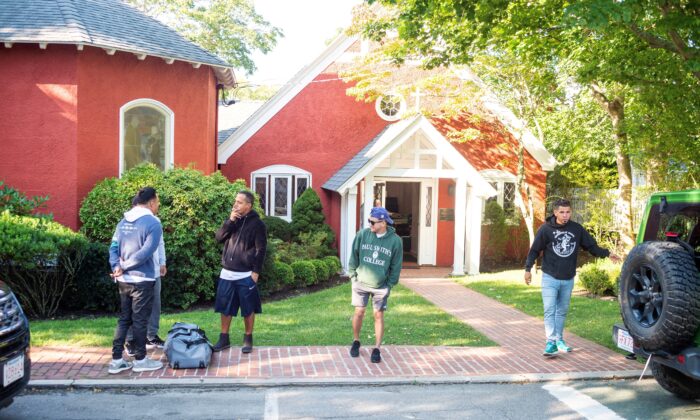 The Massachusetts governor’s office announced Friday that dozens of illegal immigrants who were transported to Martha’s Vineyard will be taken to a military base in Cape Cod, while some members of the National Guard will be activated.

The move comes as video footage and photos show the illegal aliens—of mostly Venezuelan descent—being transported on several buses from the St. Andrew’s Episcopal Church in Martha’s Vineyard, a Massachusetts island that is popular among the rich and powerful Democrats.

Massachusetts Gov. Charlie Baker’s office announced Friday that it is going to mobilize 125 members of the National Guard and said that families and individuals will be housed at the Joint Base Cape Cod.

“We are grateful to the providers, volunteers, and local officials that stepped up on Martha’s Vineyard over the past few days to provide immediate services to these individuals,” Baker said in a statement. “Our administration has been working across state government to develop a plan to ensure these individuals will have access to the services they need going forward, and Joint Base Cape Cod is well equipped to serve these needs.”

But DeSantis argued Thursday that the Biden administration has failed in its duty to secure the border, while Abbott said that New York City, Chicago, and Washington D.C. are suitable locations for illegal immigrants due to their “sanctuary city” status. After the Martha’s Vineyard deployment, few Democrats made mention of the crisis that’s emerged along the U.S.–Mexico border or the White House’s immigration policies.

“I will tell you, House Republicans have highlighted all the problems, and I think America knows these problems,” Gonzales, who represents Texas’s 23rd Congressional District, told the outlet Friday. “I say now it’s time for House Republicans to show action. We’re going to win back the majority here in November.”

“The children … deserve better than being left on the streets of D.C. or being left in Martha’s Vineyard,” press secretary Karine Jean-Pierre said.

A report last month issued by the Federation for American Immigration Reform found that illegal immigration has skyrocketed under the Biden administration, with nearly 5 million people illegally entering the United States in the past year and a half. The group blamed the administration’s policies as well as its decision to reverse several Trump-era immigration rules.

“Roughly the equivalent of the entire population of Ireland has illegally entered the United States in the 18 months President Biden has been in office, with many being released into American communities,” the group wrote in August, attacking the White House for having no “willingness to enforce our laws.”