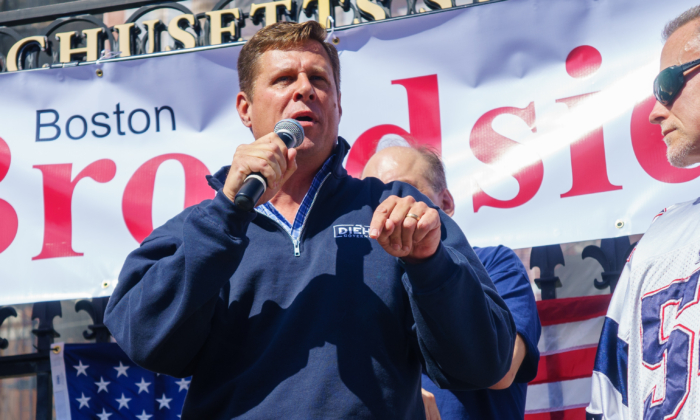 Geoff Diehl, a Republican candidate for the governor of Massachusetts spoke at the rally in front of the Massachusetts State House on September 26, 2021.(Learner Liu/The Epoch Times)
2022 Midterm Elections

With the state’s midterm primary election approaching on Sept. 6, Massachusetts Republicans are divided over their choice of who to nominate for the gubernatorial race.

Primary voters will on Tuesday be choosing between former state representative Geoff Diehl, a conservative pro-life Republican who proudly touts the endorsement of Donald Trump, and successful businessman Chris Doughty, a pro-choice Republican and self-prescribed pragmatist, who has made it clear that he does not align with the former president.

In November, one of them will face ultra-liberal Massachusetts Attorney General Maura Healey, who is not facing a primary challenge.

In a recent interview with The Epoch Times, Diehl and Doughty said they believe Healey’s overly-woke principles may be self-defeating enough to put another Republican in the governor’s seat in the otherwise blue state of Massachusetts.

“She believes in her own personal ideology and that it is way more important than serving a balanced agenda that serves the entire state and its population,” Diehl told The Epoch Times about Healey, who has decried pregnancy support centers as dangerous and has called for more drag queen events to be held in schools.

Doughty expressed a similar sentiment, saying that Healey would turn Massachusetts into a statewide San Francisco with her vow to be the most progressive governor in America.

But outside of a unanimous target on Healey’s campaign, Diehl, 53, and Doughty, 59, have a starkly different support base within the party.

Doughty, who has thrown more than $2 million of his own money behind his campaign, won an endorsement from The Boston Globe, which promoted editorially that “reasonable” Republicans should vote for him if they want to save the party from extinction, suggesting that a Diehl win will undoubtedly lead to a Healey victory.

In its endorsements of the Wrentham business owner and married father of six, the left-leaning Globe pointed to the state’s nine congressional district seats long held by Democrats, with the only state-elected Republican being retiring Gov. Charlie Baker, a moderate like Doughty.

The newspaper criticized Diehl, who has raised less than $30,000 in campaign funds, for his Trump support and vice versa and for losing big to Elizabeth Warren in his bid for U.S. Senate in 2018, something Doughty also took aim at in calling Diehl “unelectable” and “too extreme.”

“Massachusetts is a little bit different,” Doughty said, “I think our Legislature is ranked as the most progressive in America, so that kind of causes the voters to go for a more pragmatic Republican for governor.”

But Diehl, with his share of ammunition, is quick to point out that Doughty voted for Hillary Clinton in the bid for President against Trump and that while he lost to Warren, he was a three-time winner in his bid to be re-elected to the Massachusetts House.

Diehl also touts the support of the state Republican party, taking 71 percent of the delegate votes to Doughty’s 29 percent at the May convention.

Media-wise, Diehl has the backing of popular Boston conservative talk radio host and Washington Times columnist Jeff Kuhner along with The Boston Broadside, a small but politically-connected conservative newspaper, which not only supports Diehl but has gone on the attack against Doughty.

“He’s a fake Republican, ” said Lonnie Brennan, owner of The Boston Broadside, which calls it a joke for Doughty to refer to Diehl as too conservative. “Diehl looks like a conservative next to Doughty because in the real picture of things, on a scale of 1 to 100, Doughty is a 20 as a Republican and Diehl is a 70.”

Brennan has run weekly stories against Doughty, including a recent one about abutters of Doughty’s company Capstan Atlantic Inc., claiming they have endured years of pollution and excess noise from the manufacturer of powder metal components. Earlier this year, the state Department of Environmental Protection cited the company for minor environmental infractions.

Brennan hails Diehl for putting his “boots on the ground” to help put the issue of giving illegals driver’s licenses in the state on the November ballot. “Where was Doughty when Republicans were all fighting this?” said Brennan.

But Doughty, who said he too “absolutely opposes” giving driver’s licenses to illegals, has hardly been written off by traditional conservatives with a recent informal on-air endorsement from Howie Carr, another powerhouse conservative talk radio show host and a Boston Herald columnist.

In a rare aligning with The Boston Globe, Carr said Doughty has a better chance of beating Healey than Diehl.

To throw more dichotomy into the Republican divide, Carr is a staunch Trump supporter in contrast to Doughty, who recently commented on the Jon Keller show that he would like to see a “fresh face” represent Republicans in the White House.

Meanwhile, on Monday, Sept. 5, the eve of primary day, Trump is expected to host a tele-rally in support of Diehl.