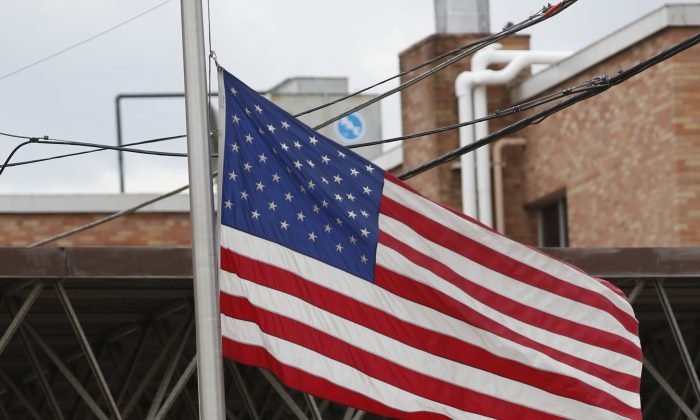 In this Monday, July 18, 2016, photograph, the flag flies at half staff above a line of Denver Police Department patrol cars in District 6 in downtown Denver. After more than two decades of making officers patrol on their own, the city of Denver has revived two-officer patrols following the killings of officers in Dallas and Baton Rouge, La. (AP Photo/David Zalubowski)
US

AMHERST, Mass.—The Massachusetts college that drew nationwide criticism when it stopped flying the U.S. flag on campus following the presidential election says Old Glory is back up.

Hampshire College in Amherst returned the flag to full staff on Friday.

The flag was lowered to half-staff after the Nov. 8 election. The flag was found burned on Veterans Day and the college decided to take down all campus flags on Nov. 18.

The decision drew widespread condemnation and a protest by veterans groups and their supporters outside campus.

Hampshire President Jonathan Lash says the flag was not removed to make a political statement or to offend, but to facilitate dialogue.

He says the flag has been raised again “as a symbol of … freedom, and in hopes for justice and fairness for all.”