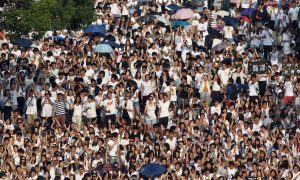 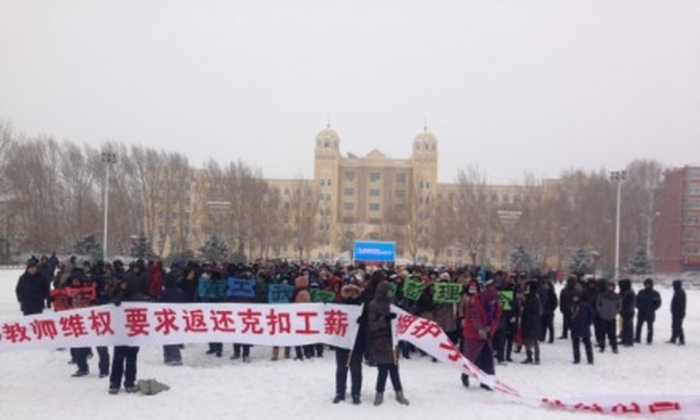 Teachers in Yilan County of northern China’s Heilongjiang Province go on strike to protest low salaries and a mandatory pension payment, on Dec. 1, 2014. The strike in Heilongjiang began in mid November and spread to six other cities over the next two weeks. (Screenshot/Weibo.com)
China

By Lu Chen and Luo Ya
biggersmaller
Print

Thousands of teachers in multiple cities in northern China’s Heilongjiang Province have gone on strike against low salaries and a mandatory pension payment plan supported by the state.

The teachers strike started in Zhaodong City in mid-November when over 8,000 teachers protested the city government; most elementary and high schools in the city remained closed during the period. The strike in Zhaodong ended with the government promising to raise teachers’ monthly salary by $125.

The strike then snowballed from late November, with thousands of teachers in six other cities of the same province going on strike and demanding better salaries and bonuses.

A teacher of 25 years in Shuancheng City of Heilongjiang is paid less than $406 a month, according to state news media. Average teacher salaries in some cities of Heilongjiang are even lower than the average income in the poorest counties in the province, reports say.

Not only are teachers’ salaries low, but they are also required to pay monthly into a pilot pension plan set up by provincial authorities. Some teachers indicated that they pay about $33 each month—so teachers have also called for the cessation of this, and the return of the money taken to finance the plan.

Heilongjiang launched the pilot pension plan in 2004, requiring government workers, including teachers, to contribute part of their salaries to a provincial pension plan for all citizens.

Teachers on strike said they now want a better salary. “If the government had done what it’s supposed to do, who would take such a method, standing on the government square for several days, being cold, hungry, and tired, and yelling till your throat is sore?” a teacher on strike told Epoch Times in a telephone interview.

Over 1,000 teachers protested in cold snowy weather in front of the county government of Yilan on Monday. Photos on Chinese social media show teachers holding banners saying, “4,000 Yilan Teacher Defend Their Rights; Pay Back Our Salaries.” Yilan schoolteachers have been protesting for a week.

No officials have yet come out to communicate with them; they said they’ll continue to protest until the government raises their salaries.