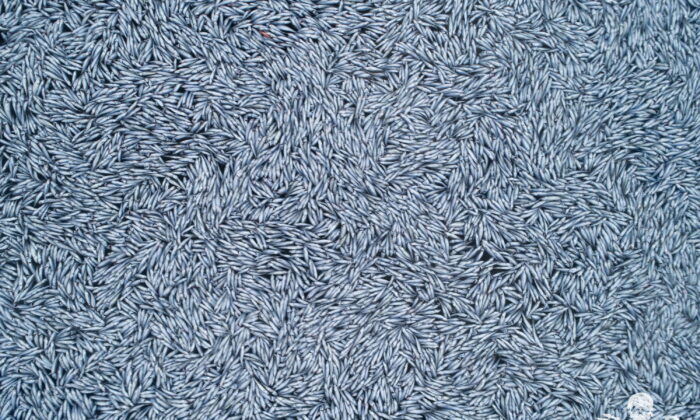 Dead fish float in the Bay of Biscay, off La Rochelle, western France, on Feb.3, 2022. (Sea Shepherd via AP)
Europe

PARIS—France and the European Union are investigating why a massive swarm of dead fish was released by a huge trawler in the Atlantic Ocean off France, after an environmental group released dramatic video and photos of the incident.

The images by the group Sea Shepherd show a blanket of dead blue whiting fish floating on the surface of the Bay of Biscay, off the coast of southwest France. The group estimates it held some 100,000 dead fish.

Struck by the “shocking” images, French Maritime Minister Annick Girardin tweeted Friday that she ordered the National Center for Fishing Surveillance to investigate what happened.

The European commissioner for the environment, oceans, and fisheries, Virginijus Sinkevičius, announced an inquiry into “national authorities of the fishing area and presumed flag state of the vessel, to get exhaustive information and evidence about the case.”

The Pelagic Freezer-Trawler Association, which represents the Lithuania-registered trawler Margiris, which caught the fish, said in a statement that the fish were “involuntarily released into the sea” on Thursday because of a tear in the trawler’s net.

“Such an accident is a rare occurrence, and in this case was caused by the unexpectedly large size of the fish caught,” it said. It said the trawler has adapted its practices to deal with “the exceptional size of the fish currently in the area concerned.”

Sea Shepherd, however, questioned whether it was an accident or instead an intentional dump of unwanted fish. The group is calling for more policing of the seas—and especially of massive industrial trawlers—to protect sea life and oceans.