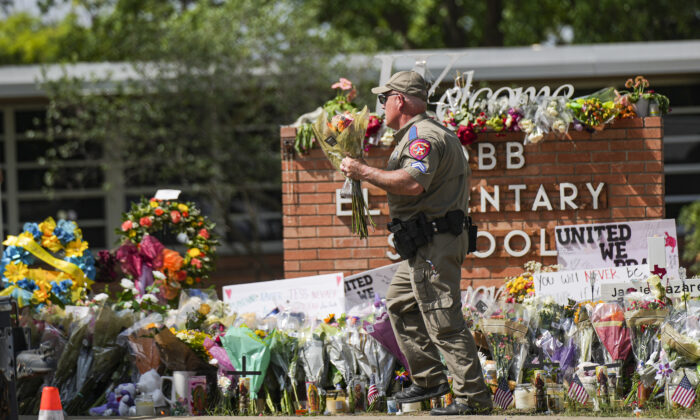 A makeshift memorial at Robb Elementary School is filled with flowers, toys, signs, and crosses bearing the names of all 21 victims of the mass shooting that occurred on May 24, in Uvalde, Texas, on May 27, 2022. (Charlotte Cuthbertson/The Epoch Times)
US News

Mass Shootings in US Are Rare, Despite Increased Attention

Mass shootings are extremely rare in America. But you wouldn’t know that if you listened to politicians and much of the media. Judiciary Committee Chairman Dick Durbin (D-Ill.) said in a recent Senate hearing on gun control that there had been 309 mass shootings in America so far this year. CNN reported that “U.S. mass shootings are on pace to match last year—the worst ever.”

Speaker of the House Nancy Pelosi said on the floor that there were 13 mass shootings across the country in just one weekend. Major media outlets like The New York Times, NBC News, and ABC News all reported on the—allegedly—“hundreds” of mass shootings this year.

All of this sounds like a national crisis and terrifying to the public, but fewer than 100 people a year are killed in mass shootings in America. While the horrific murder of young children in their school in Uvalde and the innocent people killed in a Fourth of July parade in Highland Park are terrible tragedies, those events do not mean people are at a high risk of being mass shooting victims.

The way in which politicians who want more gun control bills deliberately scare people about mass shootings is by citing a made-up definition and using statistics from an unofficial database called the Gun Violence Archive.

“Obviously, they are trying to broaden the definition to get as large a number as they can to scare the public,” said Alan M. Gottlieb, founder of the Second Amendment Foundation, said in an interview. “But the public cares more about stopping these incidents before they happen. The way to prevent them is not to take away people’s Second Amendment rights, but to make sure those people don’t get the guns to start with—and that is where we are failing.”

The standard government definition of “mass shooting” is four or more people killed in a public place who are chosen indiscriminately.

This definition, crafted by the nonpartisan Congressional Research Center (CRS) in 2013 (pdf), doesn’t count domestic violence and gang or drug-related violence because CRS explained those crime activities already have “federal policies, law enforcement structures, and laws tailored in many instances to specifically address them.” The definition matters for law enforcement and others who study and report on crime and look for solutions.

But then unofficial groups started making up new definitions for “mass shootings” that changed the methodology for counting them, which made the numbers higher. Mass shootings leads to more gun control legislation and increased media attention, according to a Harvard University study.

The left-wing magazine “Mother Jones” has a widely cited database, and it made the definition as three or more killed, which of course increases the data. It also includes domestic violence killings, which CRS explained should not be included because “a killer’s relationship to his or her victims is important” when “driven by a desire for revenge and/or power.” Those two changes in the definition have doubled its count for 2022.

“This oversimplification of ‘mass shootings’ treats all incidents as the same problem when they are different issues that require different solutions,” said Mark Oliva, managing director of public affairs for the National Shootings Sports Foundation, which lobbies for gun companies, told The Epoch Times. “This is what is seized upon by those calling for bans and complete disarmament of law-abiding citizens. The answer they turn to is getting rid of all guns, even for those who obey the law.”

The biggest change came when the Gun Violence Archive (GVA) changed the definition in its widely cited online database. It considers a “mass shooting” any incident in which there are “four victims shot”—not killed.

Also, it includes the crime categories the CRS said are not relevant.

“The Gun Violence Archive’s definition of ‘mass shooting’ can be misleading since it counts among their numbers gang-related crimes, officer-involved cases, and self-defense usages,” said Oliva. “That leads to a much larger figure being used by Gun Violence Archive, but presents the information without context. This can be confusing for readers since many accept the information as an instance of a lone individual preying on multiple people. That isn’t always the case, especially when looking at gang-related and drug-related incidents.”

GVA did not respond to a request for comment about its methodology. However, when the group’s executive director, Mark Bryant, was asked by the Second Amendment Foundation about the media’s “overhyping and misuse of his data,” Bryant responded, “If the numbers are misleading, the journalist didn’t do their homework.” He added that “When a journalist uses the mass-shooting numbers as their lead, they’re not looking at the whole situation.”

The Rand Corporation did a study on the various groups that count mass shootings and looked at how their definitions changed the results. In 2019, the seven main trackers reported mass shootings for the year ranged wildly from six to 503. Those same groups reported victims of mass shootings that year were as far apart as 60 and 628.

The government does not track mass shootings every year. The FBI releases an annual report on “active shooters” which it defines as one or more individuals actively engaged in killing or attempting to kill people in a populated area. There were 61 active shooter incidents in 2021 and 40 in 2020.

But for mass shootings, the first statistics came from the CRS report in 2013. It looked at the previous three decades and identified a total of 78 public mass shootings that claimed 547 lives.

This graphic shows the data for the most recent 10 years from DoJ and the Violence Project. You can see there have been a total of 55 mass shootings and 516 victims in a decade. (The total number of victims was 108 in 2017 because of the horrific mass shooting in Las Vegas in which 58 people were killed.)

Now that so much of the media use the GVA numbers, there is more political and media attention on the rare events. Mass shootings get drastically more focus than the bigger issue of the enormous homicide and crime spike in America. Victims of mass shootings are a tiny percentage of all people killed by firearms each year, as seen in the following graphic.

“It bleeds, it leads” is a common saying in the news business to describe how crime is good for ratings. This is partly why the media has been doing such extensive coverage of the three mass shootings this year in Buffalo, Texas, and Illinois.

While major TV networks use the GVA statistics now, the print media is not as sold into the new system.

The Washington Post is seemingly split on whether it will spin the statistics to create a more dramatic narrative or be accurate. Its Fact Checker column recently wrote that mass shootings occur six times a year on average (based on a 2021 study), but then the paper published a news story with the headline “300 mass shootings so far this year”—based on the GVA.

The “more than 300 mass shootings this year” story has been run repeatedly by media around the country because it sounds terrifying. But the stories don’t say how many victims are involved.

Before the GVA existed, the 2013 congressional report concluded that “While tragic and shocking, public mass shootings account for few of the murders related to firearms that occur annually in the United States.”

Mass shootings are horrible and terrifying for the communities where they occur. The Rand study said the impact of mass shootings is damaging to citizens’ mental health, anxiety, and perception of safety. However, the fact is that the risk of dying in one is extremely unlikely.

Editor’s note: This story has been updated with a citation to the 2021 study.