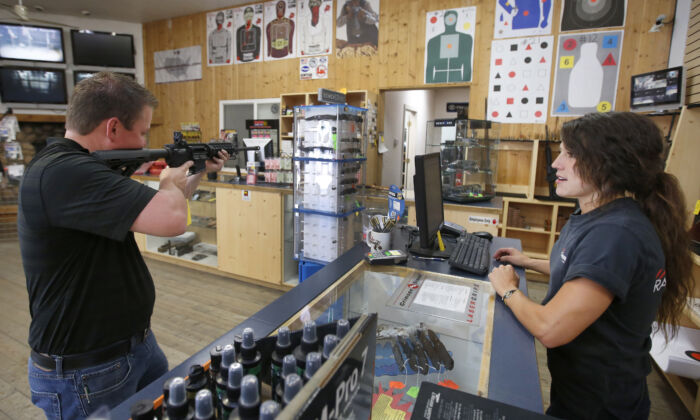 The massacre at Orlando’s Pulse nightclub on June 12 was quickly followed by a spike in gun sales, firearm background checks, and political discussions on gun control. Previous mass shootings have had the same effects.

Omar Mateen, 29, opened fire in the Florida club with a Sig Sauer MCX semiautomatic rifle, while also carrying a handgun. He killed 49 people and injured 53.

The uptick in gun sales and gun talk after a mass shooting, and the subsequent lull, is now a predictable cycle. The added factors this time around are a looming presidential election and the official declaration of gun violence as a “public health crisis” in America.

(YTD Data from the Colorado Bureau of Investigation)

Gun sales increased in Colorado after James Holmes opened fire and killed 12 people in a movie theater on July 20, 2012, in Aurora.

Both events helped precipitate a record 389,604 background checks in 2013 that were approved by the Colorado Bureau of Investigation. That was 53,664 checks more than in 2012.

The weeks after the San Bernardino shooting were among the top 10 highest for the FBI’s firearm background-check system since reporting started on Nov. 30, 1998.

The precise number of guns sold in America is unknown—but the number of background checks, using the National Instant Criminal Background Check System (NICS), is often used as the best proxy.

“Not all gun transfers are subject to the background check requirement, and there’s no federal agency that tracks how many guns are sold, or to whom,” explained Joseph Blocher, a law professor at Duke specializing in the Second Amendment, which relates to Americans’ rights to bear arms.

But, based on the number of background checks, Blocher said, “Gun sales often surge right after a mass shooting. The standard explanation is that people buy up guns because they’re afraid of new regulations being passed.”

Hector Pagan, manager of Rieg’s Gun Shop in Orlando, said people buy guns during “political talk” because they’re afraid they might not be able to in the future. Fear about incidents like the recent Orlando shooting can also be a factor, Pagan said.

An employee at the Colorado Gun Broker in Littleton, Colorado, said gun sales spiked in 2013, following the Sandy Hook massacre in December 2012. After the recent Orlando shooting, the gun shop has not seen an increase in gun sales, but it has “had more inquiries,” said the employee, who chose not to give his name.

Aside from mass shootings and politics, it’s worth noting that price is a critical determining factor in gun sales. The biggest sales period of the year, from Black Friday to Christmas, includes the record-breakers for the highest numbers of background checks on a single day and over a week.

On Black Friday, Nov. 27, 2015, the FBI reported a record-breaking 185,345 background checks for firearms in a single day. Coincidentally, it was the same day a gunman walked into a Planned Parenthood clinic in Colorado Springs, killing three and injuring nine during a 5-hour standoff.

“There was definitely an increased focus on gun regulation after Sandy Hook, at both the federal and state level,” said Blocher.

President Barack Obama again called for tougher regulations in 2015. The day after the 2015 Planned Parenthood shooting, Obama said, “We have to do something about the easy accessibility of weapons of war on our streets to people who have no business wielding them. Period. Enough is enough.”

Less than a week later, on Dec. 2, 2015, the San Bernardino terrorist attack killed 14 and injured 22. In the weeks following, Obama continued to call for tighter gun restrictions.

American voters are divided in their support of such measures.

In January, a Reuters/Ipsos poll found that about half of Americans were in favor of the next president tightening federal gun laws. More than 80 percent of Democrats favored Obama’s call for greater restrictions, while some 70 percent of Republicans were against it. Many Americans, both Republican and Democrat, support more research.

In June, after the Orlando attack, support for tougher gun laws gained 9 percentage points in a CNN/ORC poll, the highest support since 2013 following the shootings in Newtown, Connecticut.

But the polls conducted by various institutions show the complexity of the issue. Support for specific restrictions varies.

Yet legislation to that effect has continually failed, and its most recent failure occurred shortly after the Orlando shooting.

On June 23, the Senate shelved a bill related to blocking gun sales to suspected terrorists, offered by Sen. Susan Collins (R-Maine). The bill was a compromise following similar previous bills. It included an improved appeals process, for example, and used a smaller list of suspects (only those on the “no-fly” list).

But it seems the political polarity around gun control prevails even in a time of heightened sensitivity to gun violence.

On June 20, the Senate also blocked legislation that would strengthen background checks. Four gun policy measures failed to get the 60 votes needed to move forward.

“Gun violence requires more than moments of silence. It requires action. In failing that test, the Senate failed the American people,” Obama said in a tweet the day after the vote.

Meanwhile, the National Rifle Association (NRA) praised the blocking of the bill.

“Legislation that restricts the law-abiding does nothing to reduce crime and is unconstitutional. The NRA is glad that fact was recognized in federal court today,” said Chris W. Cox, the NRA’s executive director, in a statement after the vote.

The NRA has long been the strongest voice for upholding the Second Amendment, which it says is threatened by proposed gun control legislation. Cox said in a video about Obama and Hillary Clinton, “They want to shame you into surrendering your freedoms.”

“The NRA will fight—without apology—for the right of law-abiding Americans to defend themselves,” Cox added.

Where the Candidates Stand

Democratic presidential candidate Hillary Clinton supports an assault weapons ban, which has drawn the ire of the NRA.

The NRA endorsed presumptive Republican candidate Donald Trump at the end of May. However, after the Orlando mass shooting, Trump veered from the NRA’s stance to say he supports a ban on assault rifles to people on the government’s terror watch list and no-fly list.

The increased support for gun control in June wasn’t enough to push legislation through the Senate, even Collins’s bill, which had relatively high bipartisan support and clear support in voters’ polls.

With both leading presidential candidates veering toward more control, however limited, the Orlando shooting may have some lasting effect on gun laws.

The American Medical Association’s stronger stance on gun control, announced a few days after the Orlando shooting, may also fuel the push for greater restrictions.

The AMA is now pushing for wait periods for long guns and will actively lobby Congress to fund gun violence research.

“The shooting in Orlando is a horrific reminder of the public health crisis of gun violence rippling across the United States,” said AMA President Dr. Steven J. Stack on June 15.

“Mass killers have used AR-15s, rifles, and handguns, and today we strengthened our policy on background checks and waiting periods to cover them all with the goal of keeping lethal weapons out of the hands of dangerous people,” he said.

The AMA, the nation’s largest group of physicians, said it will lobby Congress to overturn a bill that, for the last 20 years, has blocked the Centers for Disease Control and Prevention (CDC) from researching gun violence.

Fear following mass shootings causes some Americans to buy guns for protection, some to call for greater restrictions on gun sales to prevent guns from getting into the wrong hands. The AMA’s lobbying efforts will be pitted against the NRA’s. The next president’s efforts toward increasing gun control will push against the barrier of the historical Republican-Democrat divide on the issue.