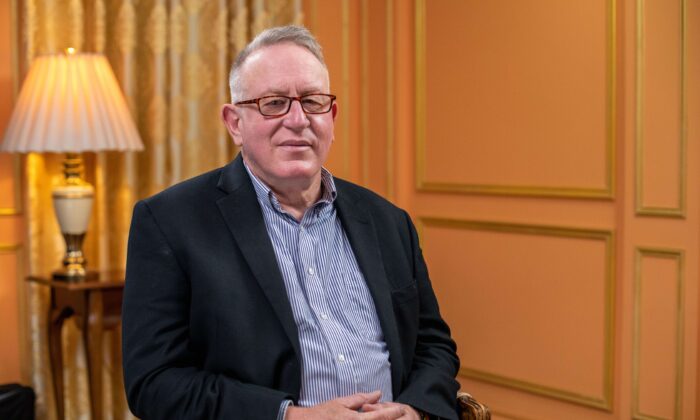 Mass Shooters’ Ties With National Bolshevism Should Be Investigated, Not Ignored: Trevor Loudon

Many mass killers adhere to the national Bolshevism philosophy, but this ideological connection that motivates them to commit crimes is often overlooked, said Trevor Loudon, author, filmmaker, and host of EpochTV’s Counterpunch program.

One type is crazed young men who usually are on drugs, have a bad family background, nowhere to go in life, want to make an impact, are angry at the world, and want to outdo other shooters, he explained.

Another kind is those political and racially motivated, many of whom are national Bolsheviks who have an allegiance to Russia, Loudon continued. The aspect of mass shooters’ ties with national Bolshevism is usually overlooked but it should not be because many of them fit into that philosophy, he added.

What is National Bolshevism

Loudon described National Bolshevism as a combination of communism and Nazism.

“It’s a communist philosophy, Bolshevik, but it has nationalist elements to it. And it’s very popular [among] some of the white supremacist groups.”

Nazism was always regarded as a left-wing phenomenon until the end of World War II, Loudon said. A lot of communists joined the Nazi Party and communism and Nazism were considered two different elements of the left, he added.

Stalin was the first one who called Nazis the right-wing, after he defeated Germany, “because then he could lay that label to conservatives and anti-communists,” Loudon said.

One of the ideological leaders of national Bolshevism is Alexander Dugin, a Russian philosopher who was an adviser to Vladimir Putin for some time.

National Bolsheviks look at Russia as the “savior” of the “white socialist world,” but consider China an exemplar of how a political system should work, and view Han racism of communist China as something that should be pushed into the West, Loudon said.

Han Chinese are the biggest ethnic group in China and account for about 90 percent of the country’s 1.4 billion population.

Many national Bolsheviks have deep connections with European radicals and Russian radicals and it is possible that the Russian military intelligence could be involved in the movement, Loudon said.

The Russians still control the international left in cooperation with communist China, but Russia understood some time ago that it is not enough to control communist parties alone, Loudon explained. “You have to be able to control the so-called right as well.”

According to Loudon, Payton Gendron, the man who has been charged with killing 10 people at a supermarket in Buffalo, New York, in May, was an open national Bolshevik. He wore the famous national Bolshevik symbol and admired Brenton Tarrant, a mass shooter from New Zealand who killed people in two mosques in 2019, Loudon said.

Gendron penned and posted online a 180-page manifesto detailing his desire to attack the supermarket, according to authorities.

His manifesto appeared to be copied from the manifesto written by Tarrant, who has been convicted and sentenced for killing 51 Muslims in Christchurch, New Zealand, Loudon said. “It was the same symbology.”

“[Tarrant explained] in his manifesto that he deliberately chose guns for his massacre, because that—he hoped—would spark the gun debate in the United States. The left would come after guns, the right would fight back, you will have a civil war, and America would collapse in the civil war,” the researcher said, adding that Gendron expressed similar sentiments.

“[The] civil war in America would mean the accession to power of Russia and China,” Loudon continued.

The nation with the closest political and social values to Tarrant’s own was communist China, Loudon, who has researched radical and terrorist groups and their covert influence on mainstream politics for more than 30 years, wrote for The Epoch Times.

Both shooters had moved from one strain of the far left to another: “to an internationalist, non-racial strain, to a more nationalist racialized strain of the left, but it’s still the left and it’s still a pro-Russian movement,” Loudon said.

These “lone wolves” plot mass shootings hoping to become one day “glorious [fighters] for national Bolshevism” and if they plunge America into civil war, they can change the course of world history, Loudon continued.

This motivation is similar to what inspires many ISIS fighters to conduct terrorist acts, Loudon added. When they pick up on ISIS philosophy and understand the group’s goals, they act as “lone wolves” without instructions.

Some mass shooters are portrayed by the many media as motivated by far-right ideology.

“These guys are not American right-wingers. … they explicitly hate America, they want to see a worldwide socialist fascist system.”

Tarrant’s manifesto is currently banned in New Zealand and for possessing it, one may be slapped with a $100,000 fine or several years in jail, Loudon added.

During the 2017 Charlottesville rally, there were two pro-Russian groups battling on the streets: pro-Russian white supremacists and national Bolsheviks fighting with pro-Russian communists from the Party of Socialism and Liberation, Loudon said.

Then-President Donald Trump and Republican conservatives were blamed for the incidents in Charlottesville, Virginia. But both sides were pro-Russian, Loudon said, calling the fight “an enemy operation.”

Loudon is a proponent of gun rights and believes that if concealed carry had been allowed in New Zealand, the 2019 mass shooting in Christchurch could have been avoided, or at least fewer people would have been murdered.

Killing 44 people in the first mosque took Tarrant 28 minutes, after which he left and drove to a second mosque where he killed seven people, said Loudon, who used to live in Christchurch. The city’s central police station is located only one mile away from the mosque where the first shooting took place but no police went there before the shooter left, Loudon said.

At the second mosque, Tarrant’s shooting inflicted less damage because some worshippers jumped the shooter and took away his gun, Loudon said. The killer fled but was arrested shortly after, Loudon added.

If some of those Muslims in that mosque were armed, the shooting would not have happened, Loudon said. Had it actually happened, possibly only two or three people would have become victims before one of the worshippers would have shot the assassin, Loudon added.

An armed society is a polite and safe society, Loudon asserted. “People will do crazy things with guns, but the net result is there’s going to be far more lives saved by universal gun ownership than they ever will be taken.”

Loudon gave an example of Switzerland, which has one of the lowest homicide rates in Europe accompanied by a high rate of gun ownership.

Switzerland requires men of a certain age range to serve in the military and those who can serve are given a firearm to keep at home. Others have to apply for a permit to get a gun, reported Business Insider. Despite the high number of gun owners, there were no mass shootings in Switzerland in the last 21 years, the Insider reported.

“It’s not the number of guns you have. It’s the attitude of the people,” Loudon said. “The people in America love freedom. … The only way they can protect that freedom is making sure the government fears the people, not the other way around.”