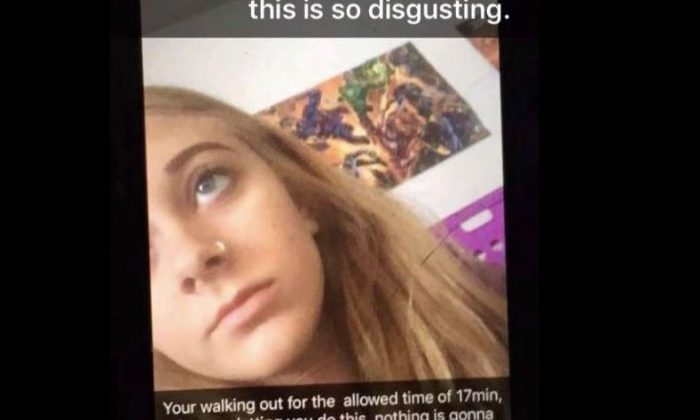 The sister of mass shooter Dylann Roof was arrested this week after making a disturbing social media post.

Morgan Roof, 18, posted on social media about the national walkout, saying “This is so disgusting.”

“Your [sic] walking out for the allowed time of 17min, they are letting you do this, nothing is gonna change what tf [sic] you think it’s gonna do? I hope it’s a trap and y’all get shot we know it’s fixing to be nothing but black people walkin out anyway,” she added, reported WIS.

A school resource officer located Roof and found she had marijuana, pepper spray, and a knife.

wistv.com – Columbia, South Carolina
Roof was arrested and charged with two counts of carrying weapons on school grounds and possession of marijuana.

Roof appeared in court on Wednesday, March 14, after being arrested and was given $5,000 bond, with one of the conditions being she was not allowed to return to the high school. She paid a $615 bond, according to records obtained by the Post and Courier, and was released.

Chris Slick, a government communications manager who was a longtime neighbor of the Roofs, said Morgan Roof did something he wouldn’t think she would do.

This is Morgan Roof, Dylann Roofs little sister, her snapchats there and all do your thang twitter pic.twitter.com/MttSF875is

“This is not the Morgan I knew. She didn’t hate people. She didn’t have prejudices like this — in fact, I witnessed the opposite,” Slick said. “I hope that one day, one day she finds peace and seeks forgiveness for what she did today. I cannot say I wish the same for her brother.”

Dylann Roof was sentenced to death in 2015 for a racially-motivated mass shooting at a South Carolina church, leaving nine people dead.

A.C. Flora’s principal, Susan Childs, sent a letter about the incident to parents and students.

“As many of you know, today was set as a time for a student walkout. Our student leaders had asked to be allowed to spend seventeen minutes to remember each of the victims of the Parkland, Florida school shooting. This student-led event was voluntary. The walkout went well with only a minor verbal disagreement that occurred at dismissal from the event. A rumor then started that a certain student had a weapon. This was heavily investigated and found to be inaccurate. In a separate situation, a student used social media to post a hateful message. The posting was not a threat, but was extremely inappropriate. That student was dealt with in a swift and severe manner as the posting caused quite a disruption,” she wrote.

“In an isolated incident yesterday, administration was notified that there was possibly a weapon on campus. Through diligent work from the Assistant Principals and the School Resource Officers, an unloaded weapon was recovered. The investigation of this matter involves law enforcement as well as school officials. Discipline for students involved will follow the Richland One Code of Conduct.

“I realize that rumors and the tragic school shootings in Florida are events that can cause anxiety for our students, parents, faculty, and the community. Be assured that the safety of our students will always be our top priority. We must continue to work together to maintain a safe and positive learning environment. Please feel free to contact me at 803.807.8697 if you have questions or concerns.”