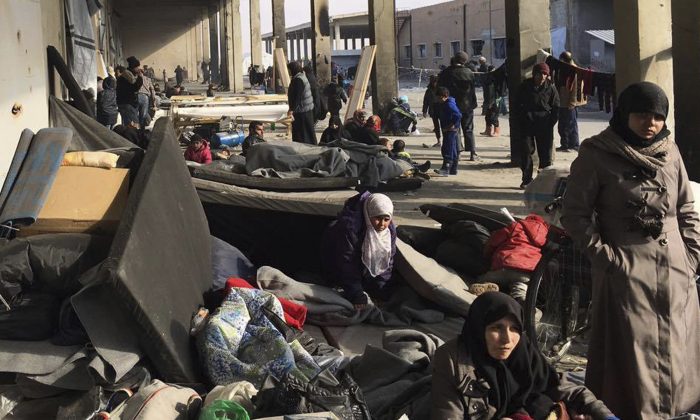 Syrians who were displaced with their families from eastern Aleppo gather at the collective shelter, in the village of Jibreen south of Aleppo, Syria on Dec. 12, 2016. (ICRC via AP)
International

Mass Killing Reported in Aleppo as Syria Troops Near Victory

BEIRUT—Pro-government forces reportedly killed 82 civilians “on the spot” as they closed in on the last rebel enclave in Syria’s Aleppo Tuesday, the U.N. human rights office said, while world leaders and aid agencies issued dramatic appeals on behalf of trapped residents.

That and other reports of mass killings, which could not be independently confirmed, reinforce fears of atrocities in eastern Aleppo in the final hours of the battle for the city, which has been split between rebel and government control since 2012.

Several residents and opposition activists have told The Associated Press that government forces carried out summary killings of rebels in the streets in neighborhoods captured on Monday, but the Syrian military flatly denied the claims, saying such allegations were “a desperate attempt” to try gain international sympathy.

None of the residents reached by AP witnessed the alleged killings. Their statements reflected the deepening chaos in the remaining rebel-held areas. Mohammed Abu Rajab, the administrator of the last remaining clinic in rebel-held parts of the city, said people who were killed or wounded are being left in the streets.

Aref al-Aref, a nurse and activist in eastern Aleppo, said civilians had taken cover in a medical center in one of the last rebel holdouts after its staff evacuated two days earlier. He said the army killed them, but pressed for details, he said he only heard it from others.

Monther Etaky, a resident of eastern Aleppo, said he also heard reports of summary killings and knows the name of three families who have reportedly been killed.

“The last news about mass executions of the people who are arrested by the Assad regime and reports of hundreds of men disappeared, missing and thousands taken to fight with the Assad army, all that will push people to stay here,” Etaky said.

The U.N.’s children agency said in a statement on Tuesday that there could be more than 100 unaccompanied children trapped in building under fire in eastern Aleppo, citing a report from an unnamed doctor in the city. UNICEF regional director Geert Cappalaere said UNICEF is concerned over the unverified reports of “extrajudicial killings of civilians, including children.”

The U.N.’s human rights office said it has received reports of pro-government forces killing at least 82 civilians in four neighborhoods of the rapidly-shrinking rebel enclave, including 11 women and 13 children.

Spokesman Rupert Colville said the reports recount pro-government forces entering homes and killing some civilians “on the spot” in the former rebel enclave. Speaking to reporters in Geneva, he said the reports came in late the previous evening and that he doesn’t know exactly when the killings took place.

U.N. Secretary-General Ban Ki-moon said in a statement late Monday that he is alarmed over reports of “atrocities” against a large number of civilians, including women and children, in the past hours in Aleppo. While stressing that the United Nations is not able to independently verify these reports, the U.N. chief said he conveyed his grave concern to the relevant parties.

A press release by the U.N. human rights office in Geneva said that multiple sources reported that tens of civilians were shot dead on Monday in al-Ahrar Square in Kallaseh neighborhood, and also in Bustan al-Qasr, by government forces and their allies, including an Iraqi Shiite militia known as al-Nujabaa.

The dramatic appeals for sparing civilian lives came a day after the Syrian military announced it now holds 99 percent of the former rebel neighborhoods of Aleppo, signaling an impending end to the rebels’ four-year hold over parts of the city.

Retaking Aleppo would be Assad’s biggest victory yet in the civil war. Aleppo has long been regarded as a major gateway between Turkey and Syria.

But a government win in Aleppo does not end the conflict—significant parts of Syria are still outside government control and huge swaths of the country are a devastated wasteland. More than a quarter of a million people have been killed since the conflict began in 2011 with peaceful protests against the Assad family’s four-decade rule.

Rami Abdurrahman of the Britain-based Syrian Observatory for Human Rights said hundreds of bodies are still under the rubble.

The International Committee of the Red Cross urged all fighting in Aleppo to spare civilian lives. It said that thousands of people in eastern Aleppo with no part in the violence “have literally nowhere safe to run.”

“In order for this to happen, we appeal to the parties to put humanity ahead of military objectives”, said ICRC’s head of delegation in Syria, Marianne Gasser, who is currently in Aleppo.

Russia, which has been a key ally of Assad, said the rebels are holding out in a neighborhood roughly the size of 3 square kilometers (1.16 square miles).

Turkey’s Deputy Prime Minister Numan Kurtulmus called for an immediate cease-fire and, if that is too late, for an international aid convoy.

The French leader said 120,000 people were being “held hostage, there is no other word for it—who are victims of bombing, who are victims of repression” in Aleppo and that everything must be done to allow the population’s evacuation.

“Without the Russians, there is no Syrian regime that can carry out operations” on the scale of what is happening in Aleppo, Hollande added, saying that the Russians “will be responsible for a situation that they helped create if they do nothing to allow access for humanitarian aid.”

Russia said it was fed up with calls for a halt to the fighting, singling out the Obama administration, which has spent months trying to negotiate a cease-fire.

“We are tired of hearing this whining from our American colleagues in the current administration that we need to immediately halt military action,” Foreign Minister Sergey Lavrov told journalists during a visit to Serbia.