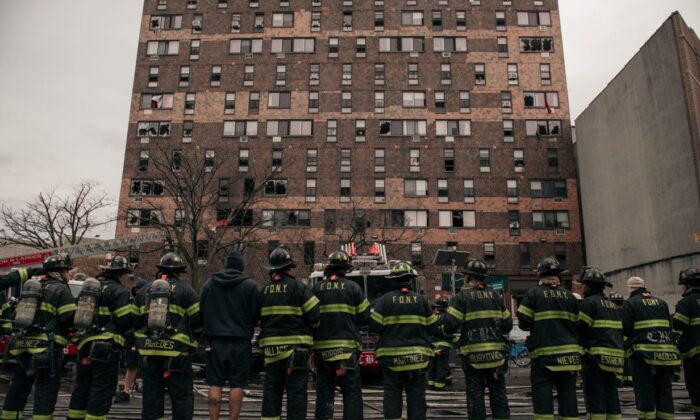 Emergency first responders remain at the scene after an intense fire at a 19-story residential building that erupted in the Bronx borough of New York City on the morning of Jan. 9, 2022. (Scott Heins/Getty Images)
Crime and Incidents

17 Dead, Including 8 Children, After Fire Rips Through NYC Apartment Building

Seventeen people, including eight children, have died in a high-rise apartment fire in the Bronx borough of New York City on Sunday.

“This is going to be one of the worst fires we have witnessed here in modern times in the City of New York,” Mayor Eric Adams said during a news conference on Sunday.

On Monday, Adams lowered the death toll from an initial report Sunday, saying that two fewer people were killed than originally thought. New York City Fire Commissioner Daniel Nigro said patients were taken to seven hospitals and “there was a bit of a double count.”

Firefighters “found victims on every floor and were taking them out in cardiac and respiratory arrest,” Nigro said on Sunday. “That is unprecedented in our city. We expect there to be numerous fatalities.”

Nigro compared the severity of the fire to the Happy Land social club fire, which killed 87 people in 1990 when a man set fire to the building after getting into an argument with his former girlfriend and being thrown out of the club.

According to Nigro, Sunday’s fire originated in a duplex apartment spanning the second and third floors. Firefighters found the door to the apartment open, he said, which apparently allowed the fire to accelerate and spread smoke upward quickly.

“This smoke extended the entire height of the building—completely unusual,” Nigro told reporters.

“There were certainly people trapped in their apartments all through this building, which is why our members did an unbelievable job of getting through every floor of this building and getting to these folks,” he continued to say. “But some of them were already in arrest when we reached them.”

Cristal Diaz, 27, a resident of the 15th floor, said she grabbed her cousins, aunt, and dog when she realized a fire was ripping through the building.

“I was drinking coffee in the living room and I started smelling smoke. We started putting water on towels and the bottom of the door. Everything was crazy,” Diaz told the New York Post. “We didn’t know what to do. We looked out the windows and saw all the dead bodies they were taking with the blankets.

Christopher Carrasquilo, 65, who lives next door, told the paper that he ran inside the building to rescue people.

“A little kid was stuck in the elevator. I had to bring him down. It was something like 9/11,” he said. “They need fire escapes. They gotta put fire escapes,” Carrasquilo added. “The owner who owns this building gotta do something about it.”

The cause of the fire is still not known. Officials said the incident is under investigation.