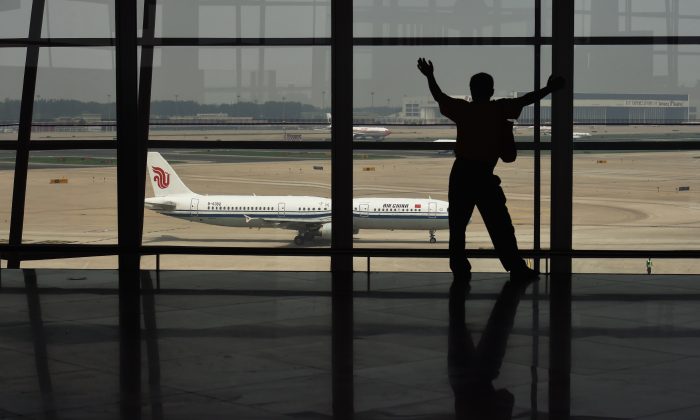 A man looks out at a plane through a window at Beijing international airport. (Greg Baker/AFP/Getty Images)
China

Nearly 60 percent of flights across China were canceled Wednesday, according to state media.

Flight Master said 9,583 flights had been canceled nationwide as of 10:35 p.m. on Sept. 21, accounting for 59.66 percent of those total scheduled journeys of the day, reported China.com.

Based in Shenzhen, Flight Master provides information on flights and ticketing and travel services.

Some busy air transport hubs in China recorded over 50 percent cancelation rates, according to Flight Master:

There is no official explanation on China’s top aviation body’s website.

But Netease, a major news portal in China, wrote yesterday that the cancellations were mainly due to recent COVID-19 flare-ups in multiple provinces in China.

According to Zhao’s tweet: “This mass cancellation of flights must be a military directive. Air traffic control authority is decided by the Chinese military, which in turn gives instructions to civil aviation management. The airspace is set aside so that military aircraft can fly at will. This is military planning, or at least with military prep.”

Zhao is the reporter who investigated the chained woman, a victim of child trafficking and sexual persecution in Xuzhou, China’s eastern Jiangsu Province. Zhao was targeted by local police and national security agents after posting his investigation online. He fled China via Malaysia and arrived in the United States in July.

The Epoch Times is not able to verify Zhao’s tweet.

The reason for this mass cancellation is still unknown.