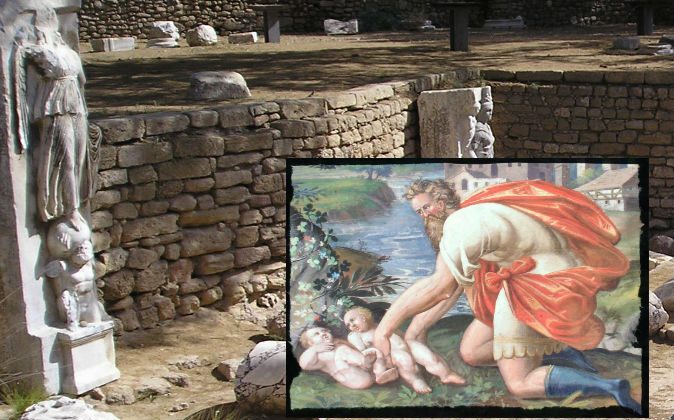 Along the shores of Israel’s Mediterranean coast, in the ancient seaport of Ashkelon, archaeologist Ross Voss made a gruesome find. While exploring one of the city’s sewers, he discovered a large number of small bones. Initially, the bones were believed to be chicken bones. However, it was later discovered that the bones were actually human—infant bones from the Roman era. With the remains amounting to more than 100 babies, it was the largest discovery of infant remains to date.

Curious as to how and why these infants died, Voss took the remains to forensic anthropologist Professor Patrician Smith. Smith examined the infant remains and determined that there was no sign of illness or disease, and that the infants appeared to have been perfectly healthy when they died. She utilized a method of forensic testing that allowed her to determine that none of the infants had lived longer than a week before dying. During Roman times, it was not uncommon for infants to be killed as a form of birth control. It was not a crime, as newborn infants were viewed as being ‘not fully human’. In most cases, a Roman woman who did not want a newborn would engage in the practice of “exposure.” She would abandon the infant, either to be found and cared for by someone else, or to perish. According to the beliefs at the time, it was up to the gods to determine whether the infant would be spared or not. The most famous account of near-infanticide, is Rome’s foundation story, in which Romulus and Remus, two infant sons of the war god, Mars, were abandoned in the woods but were raised by wolves and later founded the city of Rome.

Strangely, research indicated that the infants at Ashkelon did not appear to have been “exposed.” Rather, it appears they were intentionally killed. One clue into the reason for their deaths lies in the location of the bodies. Investigations revealed that the sewer where the remains were found was directly beneath a former bathhouse. It is possible that the infants were born to prostitutes or laborers who worked at the bathhouse. Nevertheless, this remains as mere speculation as no further evidence has substantiated the theory.

The find in Ashkelon is not the only example of a mass killing of Roman-era babies. In 1912, Alfred Heneage Cocks, the curator of the Buckinghamshire County Museum in England, made a shocking discovery. While leading an excavation in Hambleden (the site of a former Roman villa), Cocks uncovered the remains of 103 individuals. Of those 103 individuals, 97 were infants, 3 were children, and 3 were adults. While this gruesome find brings forth questions of how and why these infants had been killed, Cocks failed to conduct any investigation as to the origins of the remains.

MORE: Why and How Different Cultures Bury the Dead

Jill Eyers, archaeologist and director of Chiltern Archaeology in England, discovered the remains in a museum archive, and decided to look further into the circumstances surrounding the deaths. Eyers believes that the Hambleden site is another example of a brothel where prostitutes would give birth to unwanted children that were subsequently killed. The site was not an area of poverty, so a lack of resources could not explain the mass killing.  There were also no recorded illnesses in the area at the time that could account for the large volume of deaths. Eyers believes that the only reasonable explanation is that the site once housed a brothel.

Regardless of the reason or manner of death, mass graves of infant remains are truly disturbing. While the nature of life during the Roman era was different than it is today, and families did not have many options to limit their family size, it is difficult to imagine any mother allowing or engaging in the intentional killing of their newborn child. In time, it is hoped that we may find more answers to exactly how and why these infants were killed.