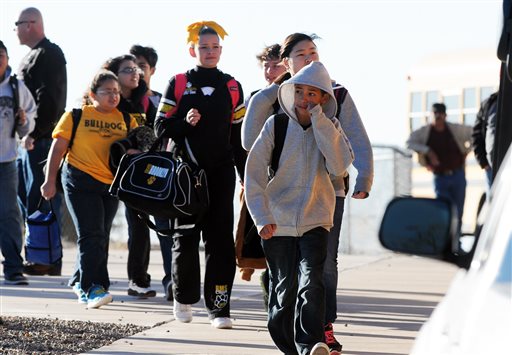 Students are escorted from Berrendo Middle School after a shooting, Tuesday, Jan. 14, 2014, in Roswell, N.M. A shooter opened fire at the middle school, injuring at least two students before being taken into custody. Roswell police said the school was placed on lockdown. (AP Photo/Roswell Daily Record, Mark Wilson)
Crime and Incidents

Mason Campbell, 12, has been identified as the alleged shooter in a shooting at Berrendo Middle School in Roswell, NM on Tuesday. Two students, an 11-year-old boy, and a 13-year-old girl, were both seriously injured.

Campbell was identified by the Albuquerque Journal by a source. Officials haven’t disclosed the name.

Gov. Susana Martinez said the students were in the gym, where they typically hang out before classes start during cold and inclement weather.

Campbell shot the students with a 20-gauge sawed-off shotgun, officials said. Campbell is believed to have hidden the gun in a bag somewhere in the school.

After he shot the students, he turned the gun on teacher John Masterson, who turned around in the gym when he heard the gunshots.

Masterson talked the suspect into dropping the gun, then put him against the wall until officials came in.

“In the 10 seconds that transpired from the time of this thing starting until the teacher had control of the weapon, there was no cowardice,” Burris said. “There was protection for our kids. Everyone acted and did their duties today at Berrendo Middle School.”

Investigators are serving a search warrant on the suspect’s home.

Albuquerque attorney Robert Gorence, who is representing the suspect, said that the boy’s family will issue a statement on Wednesday.

Campbell was reportedly transferred to a psychiatric hospital.

The male victim is undergoing a second surgery on Tuesday night and is still in critical condition. The female victim, Kendal Sanders, has been upgraded to satisfactory after undergoing surgery to repair her right shoulder.

On Tuesday night, hundreds of people poured into the Roswell Civic Center for a prayer vigil, including elected officials and law enforcement officers from various agencies. There were many hugs and tears.

“We really need this,” Roswell resident Maria Lucero, 35, said of the vigil. “We need to pray for the families of the victims and the little boy that did the shooting. I’m going to pray for them all.”

Eighth-grader Odiee Carranza said she was walking to the school gym when the shooter bumped into her as he rushed past. She told him to be careful, and he apologized and continued on. The boy ran to the gym, where he pulled a gun from a band instrument case and fired at the students.

“Then he shot up in the sky, then dropped the gun, and then some teacher grabbed the kid that had the gun,” Carranza said.

Carranza described the shooter as a “smart kid and a nice kid.”