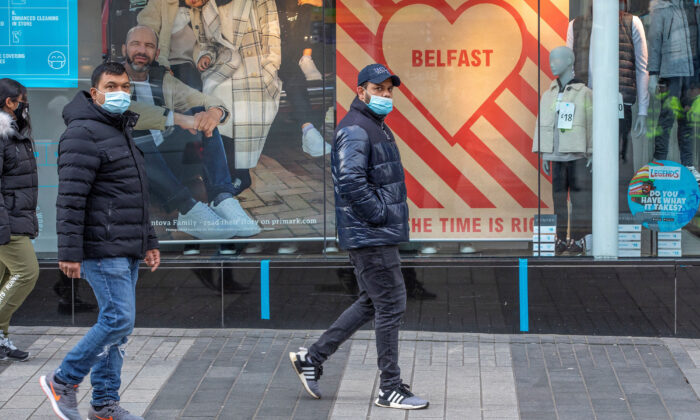 Pedestrians wearing a mask or covering due to the CCP virus pandemic, walk past a clothes shop in Belfast on Nov. 27, 2020. (Paul Faith/AFP via Getty Images)
UK

Other restrictive measures that will remain in place include “a focus on flexible and hybrid working,” the legal requirement for risk assessments in certain settings, and the compulsory recording of the details of visitors and attendees for COVID-19 test and trace purposes.

A number of restrictions will be lifted from Oct. 31, as part of the executive’s “pathway out of restrictions.” This includes the requirement to be seated in hospitality venues to drink or to eat food, the restriction on indoor dancing, social distancing mandate in hospitality settings, and forced closure of nightclubs.

However, as part of the government’s “autumn/winter COVID contingency plan, COVID status certification may become compulsory “in higher-risk settings if considered appropriate and necessary,” the first minister told members of the Legislative Assembly (MLA).

Givan also said the executive may carry out “a strengthening of arrangements for self-isolation for close contacts,” and reimpose mandatory social distancing in some settings.

The MLAs heard that a new public information campaign will be launched at the end of October.

According to Givan, 82·3 percent of citizens aged 12 and over have received at least one dose of a CCP (Chinese Communist Party) virus vaccine. As the government pivots from lockdowns to vaccinations, the first minister urged more people to take up the jabs, saying “every jab matters.”

Currently, mask-wearing has only become voluntary in England among the UK’s four nations, with governments in Scotland, Wales, and the neighbouring Republic of Ireland keeping the legal requirement.

COVID status certificates for large events are compulsory in Scotland and Wales, with Scotland only accepting proof of vaccination, not proof of negative tests or natural immunity.

The UK government previously planned to impose a vaccines-only COVID status certificate in England, but later shelved the plan, keeping it part of the contingency plan for winter.

The UK government on Wednesday rejected calls to deploy plan B in England—including COVID passes and mandatory face-coverings—saying ministers do not “feel that it’s the time for Plan B right now.”

In the Republic of Ireland, a number of restrictions will be lifted on Friday, including capacity limits for weddings, religious ceremonies, and sporting events; and the closure of nightclubs, and limits on pubs’ opening hours.

However, other measures including COVID-19 pass, social distancing, and indoor face coverings, will remain mandatory.