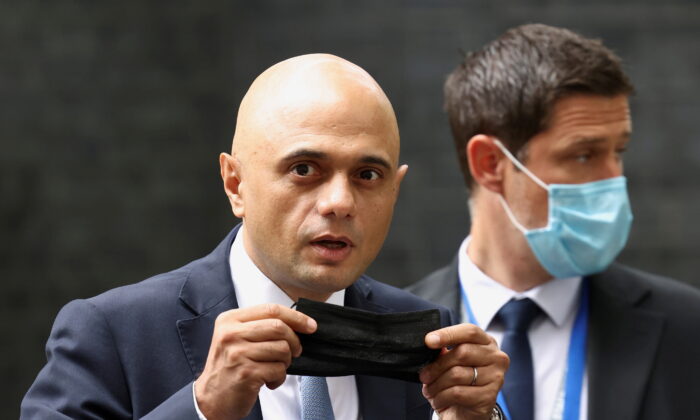 When asked on Thursday about Javid’s remarks made during a televised briefing the evening before, Prime Minister Boris Johnson’s spokesman said “it remains the case that it’s a matter of personal judgment for all individuals on wearing a mask.”

“We have very clear guidance which sets out that people are recommended to wear face coverings in crowded, enclosed spaces where they come into contact with people they do not normally meet,” the spokesman said. He also said he had not discussed the issue with Johnson since Javid made the remarks.

The health secretary told the nation on Wednesday that ministers didn’t think it was time to deploy plan B in the government’s COVID-19 winter plan, which includes mask mandates in certain settings and vaccine passports.

But he also said more restrictions will “more likely” be reintroduced if people don’t follow the advice in the government’s guidelines, including wearing masks “when they really should, in a really crowded place with lots of people that they don’t normally hang out with.”

When a reporter suggested there were double standards between politicians and the others, saying “nobody on the Conservative side was wearing a mask” on the House of Commons chamber, the Health Secretary said it was “a very fair point.”

Javid said the politicians “have a role to play to set an example as private individuals,” adding “I’m sure a lot of people would have heard you”—an apparent shift from his previous position.

Questioned about the same thing on Sept. 15, the health secretary said it’s “perfectly consistent” with government guidelines to not wear face coverings in Parliament and offices, as MPs’ colleagues are not “people [they] do not normally meet.”

Jacob Rees-Mogg, leader of the House of Commons, told MPs on Thursdays that “There is no advice to wear face masks in workplaces.”

Asked to comment on Javid’s remarks, the Conservative MP told his colleagues that “the advice on crowded spaces is with crowded spaces with people that you don’t know. We on this side know each other.”

A visible divide in lawmakers’ attitudes towards mask-wearing has been clear ever since a full-capacity House of Commons convened for the first time in 18 months on Aug. 18—when MPs were recalled from their summer recess to discuss the urgent situation in Afghanistan.

The opposition side of the chamber was often filled with mostly masked MPs, with a few exceptions, while unmasked MPs were the majority on the Conservative side.

There are dozens of circumstantial studies suggesting that masks work to stem the spread of the CCP (Chinese Communist Party) virus, which causes the disease COVID-19, although there has been just one randomized-control trial during the pandemic, carried out in Denmark. The researchers found that wearing a “surgical mask when outside the home among others did not reduce, at conventional levels of statistical significance, incident SARS-CoV-2 infection compared with no mask recommendation.”

Following the health secretary’s remarks, most Conservative MPs chose to wear masks in the Commons on Thursday.