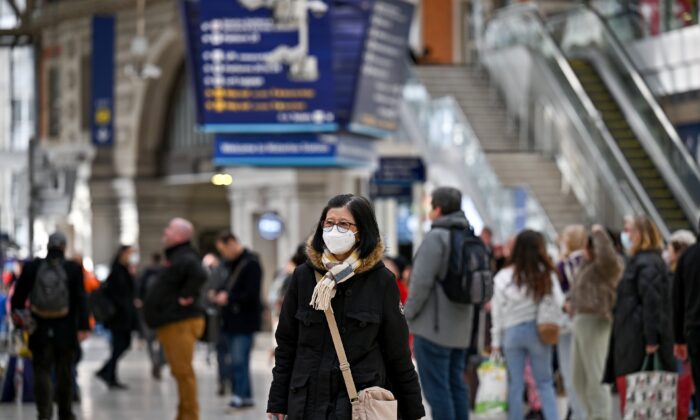 Passengers using public transport in London will no longer be required to wear masks from Feb. 24, Transport for London (TfL) has announced.

The transport body said it has “considered a variety of factors including the shift in the government’s approach towards living with the virus and decreasing infection rates in London.”

The announcement came two days after Prime Minister Boris Johnson confirmed all CCP (Chinese Communist Party) virus restrictions will end on Feb. 24, including the legal requirement for those who test positive to self-isolate.

Though face coverings are to be dropped as a condition of carriage, TfL said it “strongly encourages” passengers to continue to wear them to “keep each other as safe as possible.”

TfL’s chief safety, health, and environment officer, Lilli Matson, said: “All customers should be assured that the public transport network is as safe as other similar settings, and that independent testing has found no trace of coronavirus on our network since September 2020.

“We look forward to continuing to welcome customers back to our network as we help London and the economy recover.”

The UK’s Conservative government scrapped the requirement for people in England to wear face coverings on public transport on Jan. 27.

But face coverings have remained a condition of carriage on public transport in the capital until now, because London Mayor Sadiq Khan, a Labour politician, insisted that “wearing a face covering remains one of the single most important and easiest things we can all do to prevent the spread of COVID-19.”

TfL said demand for public transport in the capital has grown in recent weeks.

Last week around 2.2 to 2.5 million journeys were made on the Tube each weekday, which is around 60 percent of pre-pandemic levels. Weekday bus use is at around 75 percent of the normal level.

CCP virus curbs have also been loosened in Wales and Scotland, where the restrictions have been significantly more stringent than those in England.

On Feb. 17, the Labour government in Wales scrapped the requirement for COVID-19 vaccine passports as a condition of entry for both indoor and outdoor events.

On Feb. 22, the Scottish National Party administration also scrapped its vaccine passport scheme, and said other legal restrictions including mask mandates are expected to be ended in March.