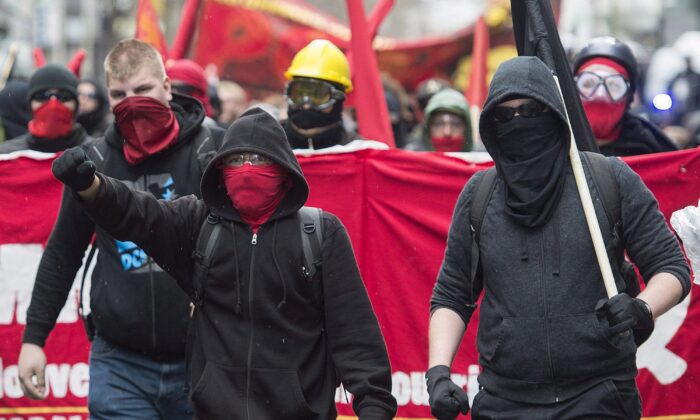 Masked demonstrators take part in an anti-capitalist protest on May Day in Montreal on May 1, 2016. Partially seen on the right of the red banner is the communist hammer and sickle symbol. (The Canadian Press/Graham Hughes)
Canada

The city of Montreal recently decided to scrap a bylaw that banned wearing masks at protests. Known as P-6, the bylaw was put in place about 50 years ago in an effort to better contain growing public disorder.

Although some have welcomed the move, there are longstanding concerns about mask-wearing at public demonstrations given that the anonymity provided by masks can be used to get away with violent or destructive behaviour, especially since the rise of the far-left group Antifa.

Back in 2012, former RCMP officer Patrick Webb said limits on mask-wearing are crucial due to such people “who have really little to no interest in making a point of view known but simply come to an event just so they can commit criminal acts, with little chance of retribution.”

“These people come equipped with weapons, disguises, changes of clothing, masks, communication devices, but most importantly, an intent to get away with acts that on a normal day would result in detection, arrest, and a charge,” he explained in an address to the Justice Committee regarding Bill C-309, federal legislation that criminalizes concealing one’s identity during a riot or unlawful assembly.

Bill C-309 was passed in 2013 in response to the unlawful actions of masked protestors during the 2012 Quebec student protests and the 2010 G-20 protests in Toronto.

In 2017, as radical groups were becoming more visible, Global News reporter Mike Armstrong and his cameraman were assaulted by a member of an “anti-racist group” at a demonstration against the right-wing group La Meute.

South of the border, the police chief in Portland, Oregon, called for mask ban legislation after Antifa clashed with right-wing groups and viciously attacked conservative journalist Andy Ngo and several others on June 29.

The Montreal mask ban, which hadn’t been enforced since 2016, was officially dropped in part because it was thought to be too draconian, giving the police license to target not only masks but also scarves and hoods. In addition, demonstrators had to provide police with an itinerary of their march.

“Since its inception, P-6 has been used to repress Montreal citizens’ right to protest,” Julien Villeneuve and Lynda Khelil argue in a Montreal Gazette op-ed, adding that the mask provision gives police license to target “any kind of facial covering they deem unreasonable.”

Mayor Valerie Plante told the city’s executive committee that discarding the bylaw makes sense since the police “already have sufficient tools in the form of the Criminal Code and the Highway Code to monitor and control public demonstrations.”

Marty Moore, a staff lawyer with the Justice Centre for Constitutional Freedoms, said a balance should be struck between protecting the civil liberties of people who want to peacefully protest from those using anonymity to commit crimes.

He said wearing a mask could be argued to be constitutionally protected freedom of expression under the Charter, but a “narrowly-tailored ban on wearing masks during a riot or unlawful assembly is likely justifiable from a constitutional perspective given the acts of violence and criminality that have been done by masked perpetrators.”

In Moore’s view, what hindered Montreal’s mask ban is that it appeared to be applied too broadly.

“If a face mask ban is limited to apply only during riots or unlawful assemblies (as it is in the Criminal Code), rather than broadly applying to peaceful protests as well (as the Montreal ban did), the narrowly tailored ban on face masks could be justified as a reasonable restriction in a free and democratic society,” he said in an email.

Measures like Bill C-309 “appear to much more carefully strike an appropriate balance,” he added.

“The constitutionality of a face mask ban will be determined on whether it sufficiently balances the important freedoms of expression and peaceful assembly with the concern about violence and crimes perpetrated by masked individuals.”

‘Legislation Would Really Be Helpful’

After the violent protests in Portland in July that left eight people injured, Police Bureau Chief Danielle Outlaw told reporters that masks worn by some protesters made it difficult for officers to identify suspects.

“Legislation would really be helpful prohibiting the wearing of mask during the commission of a crime,” she said, according to the Portland Observer.

“If you knew that you can be easily identified, do you think you would be as inclined to commit that act of violence or commit that crime? A lot of people are emboldened because they know they can’t be identified.”

Ngo, who often covers Antifa, said he was hit in the head from behind, then black-clad members of the group surrounded him and beat him with their fists and objects, while pelting him with eggs and spraying him with a white liquid. He ended up in hospital with a brain hemorrhage, according to Fox News.

Around 15 U.S. states have some kind of regulation on the wearing of masks or other face-covering during protests. Some of these originate from the time of the Ku Klux Klan and their lynch mobs, who would wear masks to hide their identity.

Antifa’s rise in the United States and Canada largely began with the Occupy movement of 2011/2012.

After the attack on Ngo, columnist Barbara Kay wrote that “masks are the key to [Antifa’s] enthusiasm. Dangerous mobs are more than the sum of their cowardly parts when the parts are permitted to conceal their identity.”

“Civil libertarians protest mask laws, understandable in an era when a photo on social media of someone attending a politically incorrect protest can do them material damage. There are doubtless many people who mask themselves for good-faith reasons at political demonstrations. Antifa members are not them.”

Shane Miller is a political writer based in London, Ontario.  Follow him at @Miller_Shane94.