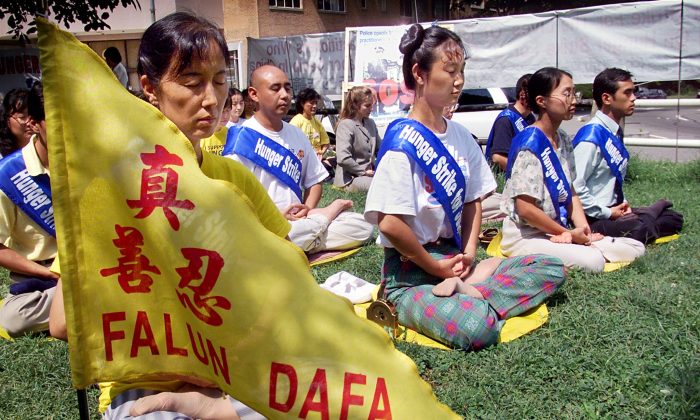 Falun Gong practitioners meditate as they enter their fourth day of a hunger strike in front of the Chinese Embassy in Washington, D.C., on Aug. 20, 2001. The practitioners held the hunger strike to call for the release of 130 practitioners imprisoned at the Masanjia Labor Camp in Liaoning Province of China. (STEPHEN JAFFE/AFP/Getty Images)
China

The May 1 screening of two independent documentaries in both Hong Kong and Taiwan has made the hot topic of the re-education through labor [RTL] system in China even hotter. Inside China, the recent attention paid to the RTL system prior to these releases had already put certain elements in the regime into a bind in which they could not admit what they had done but felt compelled to defend it.

Lens magazine’s April 6 article “Out of Masanjia” started the controversy with a long, detailed exposé of the tortures used in the labor camp.

“Above the Ghosts’ Heads: The Women of Masanjia Labor Camp” is directed by Du Bin, a contract photographer for New York Times. It takes up where the Lens magazine article left off. In this film, Liu Hua, a female petitioner and survivor of Masanjia Women’s Labor Camp, describes the torture she and other women suffered there.

“Juvenile Laborers Confined in Dabao” is directed by Xie Yihui. It tells the story of how 5,000 to 6,000 juveniles were sent to the Dabao Labor Camp in Sichuan Province in the late 1950s to receive re-education through labor. Not long after they arrived, the great famine caused by the Great Leap Forward began. Two thousand six hundred juveniles died.

The juxtaposition of the two films poses the question of what has changed in going from the horrors at Dabao to those at Masanjia.

In the screening at Hong Kong’s 1908 Bookstore, Xie Yihui addressed this question: “At the time [around 1957], there was a policy called Education-Reform-Work. It was half a day of study and half a day of work. Now they need to work all day long.”

“There is one more [difference],” Xie Yihui said. “I feel that the officers’ attitude toward the inmates is different. I don’t know how to describe the difference. In the 1950s, the officers of RTL wouldn’t treat the inmates this way. I didn’t see it in 1957. This [what is done in Masanjia] is different.”

In the early years of the communist regime, the RTL system had as its mission changing people’s minds so that they believed in communist ideology. The system was evil, but most officers working in it believed they were doing the right thing.

Today, changing people’s minds is still the most important task for the RTL system, especially for Falun Gong practitioners. But there is no ideology to convert people to.

How could the officers transform Falun Gong practitioners into believing in something the officers themselves don’t believe and don’t understand?

The CCP developed formal criteria at Masanjia for the “transformation” of Falun Gong practitioners, which were subsequently promoted throughout the RTL system. None of the criteria is about forcing practitioners to accept an ideology—neither communism, nor socialism, nor anything.

The officers in Masanjia know what they are doing is evil. Falun Gong practitioners have reported what guards say are the signs of transformation, “When you start to curse others with dirty words, when you start to beat others, you are successfully transformed.”

The officers want to make money from the slave labor done in the camp, get promoted, and receive bonuses for reaching the targeted transformation rate for Falun Gong believers.

Fifty years ago, the deaths were caused by starving, disease, over work, and mistreatment.

Today, torture is not punishment. It comes with the policy.

After a half century, the evil of “reforming” rightists and intellectuals into adopting communist ideology has become the evil of “transformation” and money worship. Now, the torture is intentionally designed and becomes routine. It is even an entertainment for the officers.

The whole change started on Oct. 29, 1999, when the Women’s Second Brigade was established inside Masanjia Labor Camp. The only purpose of this brigade was to transform female Falun Gong practitioners.

“Out of Masanjia” exposed a great crime. In the past, when a crime is laid at the feet of the CCP, it usually finds a scapegoat.

This time was different. The Party Committee and the government of Liaoning Province, where Masanjia is located, formed an investigation team. The team worked quickly. Just a few days after the Lens magazine article came out the team published a report that explicitly denied while implicitly confirmed the accusations.

The investigation team leaders are either responsible persons or even perpetrators of the crimes exposed by the “Out of Masanjia” article and “Above the Ghosts’ Heads” documentary.

The investigation team short-circuited any chance of finding a scapegoat by issuing a blanket denial that any torture was used at Masanjia. The report did not offer any evidence or proof for its findings, but it did accuse Lens magazine of using the words of “overseas Falun Gong media” in describing the tortures taking place there.

In fact, the account of torture in “Out of Masanjia” came from a petitioner who is not a Falun Gong practitioner. The article did report that a “special group”—the closest any magazine published in China could come to mentioning Falun Gong—was targeted for torture at Masanjia.

If the team simply wanted to publish a denial of the Lens article, it would have likely not mentioned the “achievement” of transformation or the words of overseas media. It brought up these subjects for another purpose.

The investigation team wanted to defend the policy of persecuting Falun Gong that was initiated by Jiang Zemin and has been going on for almost 14 years. The team’s report serves as a warning to whoever might be behind the Lens article, if there is such a figure.

By eliminating any scapegoat while sending this warning, the investigative team binds itself to what has happened at Masanjia. The team’s leadership ran Masanjia, and the report shows the Liaoning Party and government taking ownership of what happened there.

“Out of Masanjia” and “Above the Ghosts’ Heads” exposes the darkness of the RTL system. Masanjia Labor Camp is one of 350 labor camps in China, and the tortures developed at Masanjia were used in every labor camp.

In China, members of academic circles and legal circles, ordinary people, and even the Party’s mouthpiece media have for years openly discussed abolishing or reforming of the RTL system.

Even the CCP could benefit from abolishing or reforming the system. This wouldn’t be the first time for the Party to convert bad to good and in doing so reclaim the greatness, glory, and correctness of the Party.

However, Masanjia has meaning that goes beyond the evil of the RTL system in two ways.

First, Masanjia is the symbol of persecuting Falun Gong. This labor camp is the model for the Jiang Zemin regime’s campaign against Falun Gong. The Falun Gong Minghui.org website has published more than 8,000 articles about the torture, rape, and force-feeding that have taken place at Masanjia over the past 13 plus years.

Any exposure of the crimes at Masanjia, no matter whether Falun Gong is mentioned or not, hits the CCP’s most sensitive nerve. Such exposure raises the issue of who will be held accountable for these crimes. Top figures in the regime are suddenly made vulnerable.

Second, the crimes at Masanjia show that the systematic torture is not a mistake or a flaw that can be corrected or fixed. If torture is confirmed as CCP policy, not some individual RTL officer’s personal habit, the Party’s image and legitimacy will face an unprecedented challenge. The Liaoning investigative report, by discussing the “achievement” of transforming Falun Gong practitioners, just did that.