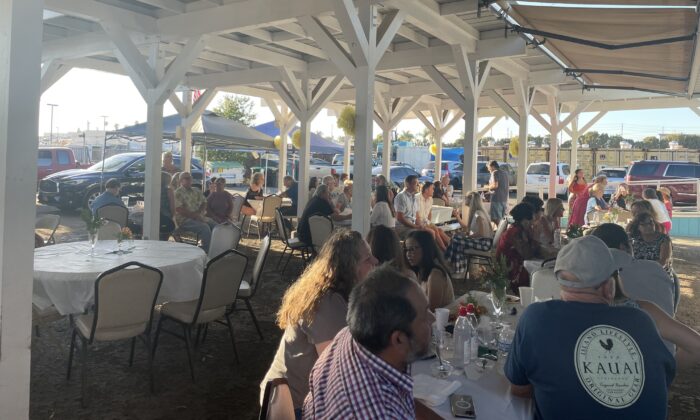 ORANGE, Calif.—After serving the homeless population for over 37 years, Mary’s Kitchen bade volunteers a farewell July 10 as its officials look for a new location after the city asked the nonprofit to shutter for public safety concerns.

Relying on donations and volunteers, the food distribution center has been providing the less fortunate in the community with shower and laundry facilities, mailroom, and medical services since the mid-1980s.

City officials previously ordered the nonprofit to stop operation and move out of the current building at 517 W. Struck Avenue by June 10, citing concerns about its potentially attracting criminal activity and enabling—rather than resolving—homelessness.

During the final banquet—held as a “thank you party” outside of the center—participants shared feelings of sorrow and gratitude.

“We grieve with and for those who have no place to call home and don’t have a place to feel safe,” said Dana Kinkaid, the senior pastor of First Christian Church of Orange, during her banquet speech. “And we are grateful for the opportunity and privilege of serving those who have come onto this property.”

Kinkaid, along with the charity’s President Gloria Suess and its volunteers, don’t refer to those in need as simply “homeless,” but rather as “guests”—a term Suess said to be necessary to demonstrate the care and respect for those in need that came through their doors.

Looking back on their time serving at the center, many volunteers took to the stage to share some of their most treasured memories.

One such story involved Kenny, a guest struggling with substance abuse. After years of “stumbling” into Mary’s while intoxicated, he finally hit rock bottom and received the help he needed.

After that, he went missing for two months. Volunteers heard that he passed away under the Huntington Beach Pier from alcohol poisoning. Saddened, they grieved his loss and even held a memorial service for him.

One afternoon weeks later, however, he walked through the center’s doors for lunch.

“Kenny came back to life!” the speaker, a long-time volunteer, joked as the audience laughed.

Soon after, Kenny was able to overcome his addiction and complete a rehab program in “record time” thanks to the volunteers and the Orange County Rescue Mission, a Tustin nonprofit also aimed at homeless outreach.

Now he is in a leadership role for a local landscaping company while helping at Mary’s as a prayer leader and volunteer himself.

Kenny’s story is not unique. Another volunteer recalled her own stint of homelessness following an altercation with her family.

“If it wasn’t for this place, I wouldn’t be fed, showered, or clothed,” she said.

Two years prior, she was disabled after back surgery, during which time her finances were taken over by her family, she said. After being turned away from churches and other charities, she found the care she needed at the nonprofit.

“Gloria and everyone at Mary’s Kitchen saved my life,” she said through tears. She has since served as a volunteer—alongside other Orange County residents formerly or currently facing homelessness and food insecurity.

Despite wide-ranging support from its numerous volunteers, the nonprofit faces the challenge of finding a new place to continue its operation.

Marc Delgado, a volunteer at the center for over three years, has created a Gofundme fundraiser for the charity’s relocation since late December, which now has raised over $4,000.

“There’s a lot of indifference about homelessness,” Delgado told The Epoch Times. “But we’re not giving up. I don’t know any other charity that does what Mary’s does.”

Numerous other volunteers said their “guests” are just people who need some help in difficult times.

“Most of our guests are not criminals. They’re not drug addicts, or mentally ill. Some of them are, and we deal with them with the proper care and resources we have available to us,” she said.

Though it is still uncertain whether they can find a new location to continue operation, many remain optimistic.

“I don’t think this is the end,” another volunteer said. “I don’t know how we’re going to come back, but I do believe we’re all going to come back. Because [Mary’s] is too good, too kind, too caring, too big, for it to be over.”