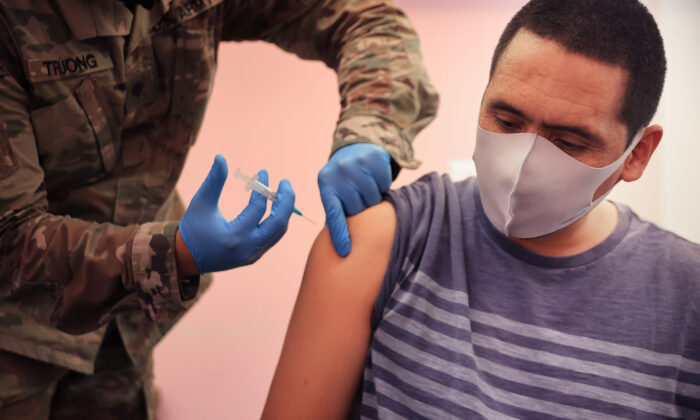 A man gets vaccinated in Wheaton, Md., in a file image. (Chip Somodevilla/Getty Images)
AMERICA

Lawmakers in Maryland’s largest county won’t be moving forward with plans to impose a COVID-19 vaccine mandate—although officials are keeping open the option of imposing it in the future.

Montgomery County Executive Marc Elrich, a Democrat, pushed for the mandate, which would have required all businesses to screen customers for proof of COVID-19 vaccination. But when the Montgomery County Council held a hearing in January on the proposal, many business owners and residents raised objections to the plan, prompting the council to delay a decision.

Now, with COVID-19 cases down considerably after soaring earlier in the winter, and other jurisdictions rolling back mandates, the council is setting aside the proposal, at least for the time being.

Montgomery County Council President Gabe Albornoz told reporters in a recent briefing that one reason for delaying a vote was to see how mandates worked in neighboring areas, principally Washington.

“There were many concerns and questions raised by colleagues about the efficacy of the effort, given our high vaccination rates. And so we just were not ready and prepared to move forward. And I think the decision made by the District of Colombia … validates the decision to wait and see how this was implemented, and its efficacy in other communities. So I think it was the appropriate decision to hit the pause button on that. And I don’t anticipate that we will be bringing that up anytime soon,” Albornoz said.

“There are no plans to bring this issue up again before the council, and I don’t anticipate that there will be.”

Bethany Mandel, editor of the “Heroes of Liberty” book series, told The Epoch Times that she and her husband were going to move out of the county if the mandate had been imposed.

“This was this was a make or break thing for us staying in Montgomery County, because my kids, who all kind of just had COVID, have to be able to go out to a restaurant or go to a gymnastics class or dance class,” she said. The council “saw the power of the community and the level of pushback that they were getting when they tried to sneak it through, and I think that they saw that they couldn’t do that and that the community wasn’t going to let them.”

Every member of the nine-person council is a Democrat; the county is one of the most liberal in the state, which regularly votes for Democrats in statewide elections. Montgomery County abuts Washington and has a population of about 1 million.

According to data reported to the federal government, some 90 percent of county residents 5 and older are fully vaccinated or have completed a primary series of a COVID-19 vaccine. About 51 percent of all residents have received at least one booster shot.

Because of the changing metrics, the council is planning to let its mask mandate expire on Feb. 21.

Elrich, who was responsible for the vaccine mandate proposal, believes it should have been implemented when Washington authorities started their mandate in mid-January, Scott Peterson, a spokesman for the executive, told The Epoch Times in an email.

Elrich “always believed that a proof of vaccine program would be temporary until we were at manageable transmission levels,” Peterson added. “He hopes that if or when another surge happens, we are willing to consider these kinds of measures to protect the health of our residents.

“We have always known that minimizing person-to-person contact, or mitigating the risks of that contact, was the key to minimizing the spread of the virus and we should not lose sight of that as we move forward.”