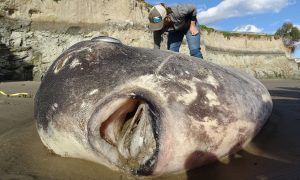 A Huge, Strange-Looking Fish Washed up on a California Beach. Scientists Say It's a First
0
Share Now
TelegramFacebookTweetEmailTellMeWeReddit
Copy Link 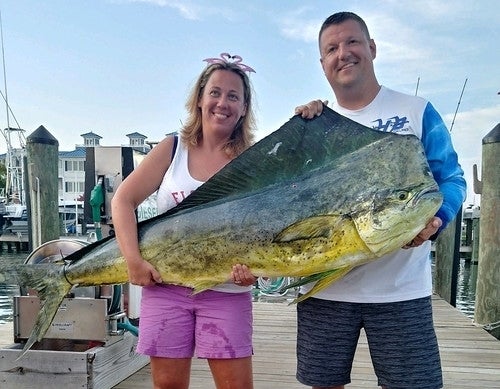 Kristy Frashure poses with her husband, Ryan, and the record-setting common dolphinfish she caught off Ocean City on Aug. 16, 2019. (Maryland Department of Natural Resources)
US News

A Maryland woman has set a new state record for catching the largest mahi mahi, also known as a common dolphinfish.

The Maryland Department of Natural Resources said in a news release that Kristy Frashure of Pasadena reeled in the 74.5-pound fish during a tournament in Ocean City on Aug. 16.

Frashure was taking in the Poor Girls Fishing Tournament when she made the record-breaking catch.

“It took nearly 20-30 minutes to reel in … it felt like an eternity,” Frashure said, according to the news release. She and five friends were fishing off Poor Man’s Canyon when she made the massive catch.

“We were taking bets on how much it weighed,” she said of the fish, which was identified by a Maryland Department of Natural Resources biologist as a common dolphinfish—known by its Latin name Coryphaena hippurus.

Wright broke the 34-year-old Maryland record on July 28, also off the coast of Ocean City, the Maryland Department of Natural Resources said in a release. His record-setting dolphinfish weighed 72.8 pounds.

“It literally took 25 minutes to get this in,” Wright said, according to the release. “I had to play it until it finally gave up.”

The department notes that it awards plaques to anglers who catch record-setting fish, adding that fish caught from privately-owned, fee-fishing sites are not eligible for a prize.

On June 10, a North Carolina fisherman broke the state record for redbreast sunfish when he reeled in a 2-pound specimen.

Jackson said he caught the fish after deciding to return to where his father taught him to fish.

“We started fishing in a pond but weren’t having any luck, so I said to my kids, ‘Let’s go back to where I learned how to fish’ and this is what we caught,” Jackson said in a statement.

“Congratulations to Maxton resident Alphonso Jackson, who broke a 36-year-old freshwater fish state record on June 10 after landing a 2-pound, 1 ounce redbreast sunfish from the Lumber River in Wagram,” the commission said on Facebook.

Those who do not qualify to break a state record can still receive another form of recognition from the commission.

“For anglers who catch a redbreast sunfish that does not quite measure up to this latest record-breaker but is 11 inches or longer or weighs 1 pound or more, the commission has a redbreast classification for its North Carolina Angler Recognition Program (NCARP),” the commission said in a statement. “NCARP officially recognizes anglers who catch trophy-sized freshwater fish that do not qualify for a state record with a certificate featuring color reproductions of fish artwork by renowned wildlife artist and former commission Fisheries Biologist Duane Raver.”

On June 9 fishing enthusiasts in the Midwest caught a record-breaking catfish.

“Cody Sechser and Isaac Kipp both were able to stick an arrow in this monster and therefore will both be the newest state record holders,” the group said on Facebook. “This 24 lb 12 oz giant was shot out of a shallow section of Skunk Creek … there have been numerous hook and line records and this is our first archery record.”

The Bow Fishing Association of America (BFAA) went one step further to call the 38.5 inch long catch a new world-record on June 18, according to The Associated Press.

The BFAA confirmed the latest record catch was more than a pound heavier than the previous record of 23 pounds, which was set just a fortnight before Sechser and Kipp made their catch, according to AP.

According to The Associated Press, Sechser claimed to shoot the fish in the spine and Kipp shot it behind the head, killing it instantly.

“For a solid two hours I thought I was dreaming,” Sechser said, according to AP. “It didn’t even seem like it was real. To be honest, I didn’t even sleep that first night.”