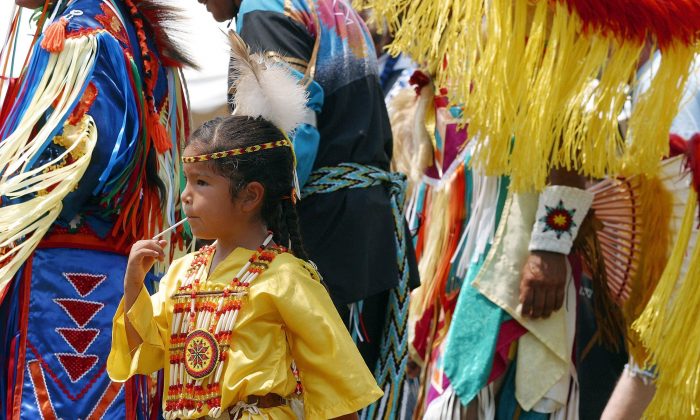 URBANA, : Five-year-old Tarlynn Tonepahhote of the Iowa Oneida Native American Indian tribe joins adult male dancers at the "Grand Entry" start of a powwow in Urbana, Maryland, 04 August 2002. Powwows are a Native American celebrations where young and old gather to socialize and preserve native traditions by partaking in competitive singing and dancing contests for prize money. According to the 1990 US Census figures, there are 1.87 million American Indians living in the United States. AFP PHOTO/Robyn BECK (Photo credit should read ROBYN BECK/AFP/Getty Images)
archaeology

ANNAPOLIS, Md.—Is this a case of prehistoric sprawl?

County archaeologists over the past several years have uncovered centuries of Native American history at Pig Point along the Patuxent River, now they think a vast settlement surrounded the ceremonial gathering spot.

“We thought of Pig Point as a central, ceremonial place,” C. Jane Cox, county chief of cultural resources, said Wednesday. “There have been hints of other settlements, people have found artifacts in the area, but it looks now like there might have been thousands of people here for a long, long time.”

She was standing near the shore near the southernmost end of the Jug Bay Wetlands Sanctuary in Lothian where two primary areas are being studied, one along the shoreline and the other upland near Two Run Branch that flows into the river. Crews have been digging all summer unearthing evidence of Pig Point’s “suburbs.”

The biggest surprise has been the wide distribution of artifacts. “It’s everywhere,” Cox said.

The archaeology team’s approach begins with the digging of shovel-test-pits a couple of feet deep that are set up in a grid across the potential study area. A promising site will have clusters of shovel pits with some artifacts or other evidence in spots scattered across the grid.

“We dug 450 test pits over a quarter-mile area,” Cox said. “Nearly every one of them had artifacts.”

Pig Point itself has become vital in the understanding of pre-Columbian settlement and ceremony. The initial discoveries were of projectile points and pottery up to 8,000 years old, and evidence of wigwams built centuries apart.

But then a large burial ground was discovered across the road from the original digs, which started in 2009. Evidence uncovered there in 2012—smashed human bones of over 1,000 individuals and other artifacts, points to some form of ritual mortuary practice, perhaps spanning thousands of years.

Layers and layers of history were uncovered, all in roughly the same location. “Finding deep sites, with multiple periods of occupation through time, are really, really rare,” said Matt McKnight, research archaeologist with the Maryland Historic Trust, which oversees two primary grants funding the fieldwork at Pig Point. “That is the importance of the find. We should be able to learn about cultural change over time.”

But after two field seasons studying test sites up and down the river, evidence points to a much wider pattern of settlement than previously thought.

“There could have been villages stretching 3.5 miles along the river,” Cox said.

Along Jug Bay, evidence is multilayered, overlapping—and old. Projectile points dating back 6,500 years have been found at Pig Point and this season’s site. One projectile point was carbon dated back 10,000 years.

And there are, at this point, 14 sites within a mile of Pig Point central.

“It’s a ‘going to take a lifetime’ sort of thing,” Cox said.

Because of tidal action, storms, flooding, and potential sea level rise, the area along the river is of special concern. One of the grants paying for the current field work is federal funding related to Hurricane Sandy, underwriting studies of cultural resources potentially threatened by storms or sea level rise.

The square uncovered Wednesday was about 10 inches deep and 5 square feet. “This is a 700-year-old living surface,” said Stephanie Sperling, project director for the grant study. “It was full of material, oyster and mussel shell, deer, fish, and turtle bones. We also found deer bone tools.”

But the pit had an inch of water in it, no further digging would happen that day.

The water table, so close to the water, is tidal. An hour or so later the pit was almost dry.

Earlier this summer, the pit and the several other preliminary test squares dug were dry.

“But after a storm or heavy rains like we have had, the tide rises,” Cox said. “By midcentury they are talking about two feet of sea level rise.”

“That is why we are here,” said Al Luckenbach, who retired as the county’s archaeologist a year ago but is still keeping a hand in things at Pig Point and related efforts.

“This bone, these tools will not last underwater,” he said. “There is plenty of prehistoric stuff already underwater. All this, everything, is threatened at this site.”

Aside from surveying and unearthing artifacts, the current study is also trying to figure out how the land has changed.

“How did this landform develop? Did it wash down from the uplands or from up river?” Sperling said.

Part of the work is developing a cross-site profile of the land and the elevations where artifacts are discovered.

“Once that is all processed, we hope to be able to determine the soil layers and when they were formed,” she said.

This winter, once field work is done for the season, researchers will concentrate on tying all the gathered evidence together.

“We have never had the opportunity that we have now to put all the pieces together,” Cox said.

They will start field work again in the spring.