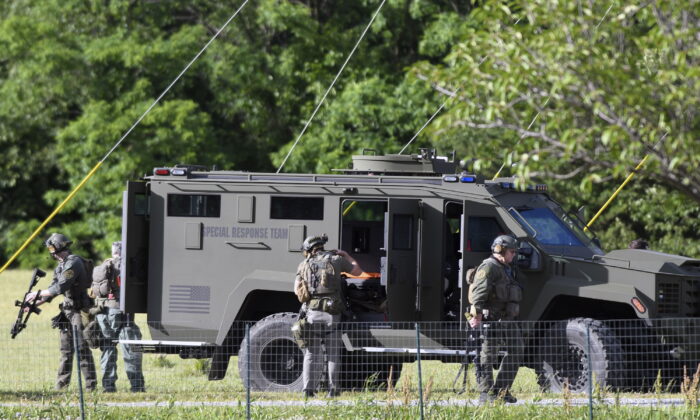 Tactical police work near where a man killed three people when he opened fire at a business in Smithsburg, Md., on June 9, 2022. (Steve Ruark/AP Photo)
Crime and Incidents

A West Virginia man was charged with murdering three co-workers at a Maryland machine shop as well as attempted murder and other charges, authorities said late Friday.

The name of the alleged shooter, Joe Louis Esquivel, 23, of Hedgesville, West Virginia, was also released by the Washington County sheriff’s office on Friday.

Esquivel, who was hospitalized after a shootout with police, is currently being held by the Washington County Detention Center on no bond.

Authorities say Esquivel arrived Thursday morning for his normal shift at Columbia Machine Inc. in the small rural community of Smithsburg in western Maryland. He allegedly worked until he left the building to retrieve a weapon, went back inside and fired on employees in the area of a breakroom. Police responded to a 911 call at about 2:30 p.m.

The sheriff’s office has not released a motive.

Smithsburg police who arrived first on the scene found a wounded person outside the business. As deputies arrived, three additional victims, all deceased, were located inside, the Washington County sheriff’s office said.

Esquivel left the scene in a car and was quickly met by Maryland State Police. A Maryland state trooper who was injured in a shootout with the suspect was treated and released late Thursday, authorities said.

A search warrant was executed at the suspect’s West Virginia residence, and additional firearms were located, the sheriff’s office said.

Reached by telephone Friday, Nelson Michael, the father of Brandon Michael, 42, who was wounded in the machine shop shooting, said his son was still in the hospital, but he didn’t know more about his condition.

Nelson Michael said he didn’t know why the gunman shot the victims.

“I’m not saying any more. I’m just glad my son’s alive, and I feel so bad for the families of the other ones,” he said.

Authorities said the investigation is ongoing.

Mullendore said the suspect used a semiautomatic handgun, which was recovered after the shootout.

Smithsburg, a community of nearly 3,000 people, is just west of the Camp David presidential retreat and about 75 miles northwest of Baltimore. The manufacturing facility was in a sparsely populated area northeast of the town’s center with a church, several businesses, and farmland nearby.

Based in Vancouver, Washington, Columbia Machine manufactures equipment for concrete products, and its Smithsburg location builds molds and works on parts and repairs for other plants. The company’s CEO, Rick Goode, issued a statement calling the deaths of three employees and the wounding of a fourth tragic.

“Our highest priority during this tragic event is the safety and wellbeing of our employees and their families,” he said.

Dennis Stouffer lived about a half-mile from Frey, one of the victims, and said he would see Frey at the mailbox when he drove by.

He described Frey as “a solid individual” and “a good guy.”

Stouffer said in a phone interview that Frey once made meat hooks for a deer-meat processing shop he used to run in Smithsburg.

“He didn’t make a bunch of noise or anything. He just went about his work,” Stouffer said.

Speaking late Friday morning, Stouffer said the reason for the shooting remained “a big mystery” to people in the community.

“We’re all in shock and disbelief, and that’s an understatement,” Stouffer said.

By Brian Witte and Sarah Brumfield