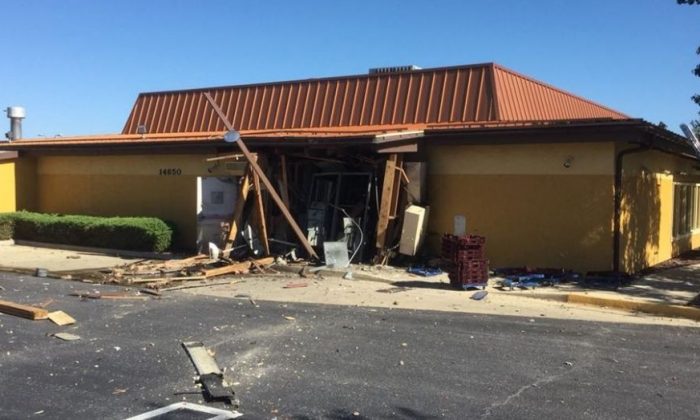 An explosion occurred at the Olive Garden restaurant in Laurel, Maryland, as some 70 people ate there.

Rear of Laurel resteraunt had some type of explosion. No active fire. No injuries. Significant damage. PGFD 14650 Baltimore Ave pic.twitter.com/B2PAC2QfAy

The blast sent debris from the restaurant across the parking lot, according to helicopter footage. The restaurant was severely damaged.

#Breaking electrical panel was crackling and then the mgr says it blew up. Debris blown over to Laurel Lake. pic.twitter.com/pFEskCty3d

#BREAKING gas explosive at Olive Garden. All employees are ok. Back of building blown out. pic.twitter.com/Di8vHLq1uF

Cherry Lane and 4th Street were shut down in Laurel.

“Debris flew hundreds of feet—some ending up near Laurel Lake,” the city of Laurel wrote on Facebook.

There were no major injuries from the explosion, Mark Brady, Prince George’s County Fire Department spokesman, said on social media.

YALL I just witnessed Olive Garden catch on fire. Like it exploded

The Olive Garden is located at 14650 Baltimore Ave. in Laurel.