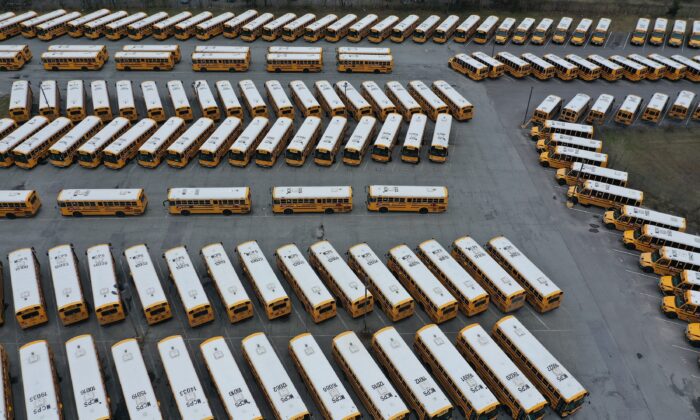 Maryland National Guard members will not be sent to the state’s most populous county to help alleviate a school bus driver shortage.

At the request of Montgomery County Public Schools (MCPS), the county’s government sent a request this week to the Guard to send personnel to fill in for drivers out sick.

“Unfortunately, no resources are available,” he told a virtual briefing on Wednesday.

A spokesman for the Guard told The Epoch Times in an email that it is “currently focused on supporting the Maryland Department of Health and other state agencies with missions for COVID-19 testing, supporting local hospitals and skilled nursing facilities, and assisting with non-life-threatening patient transport during the state of emergency due to a surge in COVID-19 hospitalizations.”

Additional questions were directed to the office of Gov. Larry Hogan, but weren’t returned.

The request was also sent to other jurisdictions through the Maryland Interstate Emergency Management Assistance Compact, a county spokesman told The Epoch Times in an email.

“This request is wider reaching than just National Guard,” he said. “That said, many jurisdictions are facing similar challenges, so we are not sure we will get much support going this route; however we are exhausting all options nonetheless.”

Hogan, a Republican, declared a state of emergency earlier this month over a jump in COVID-19 cases and hospitalizations in Maryland, and activated 1,000 members of the Maryland National Guard to help state and local health officials in their response to the pandemic.

Officials said at the time that Guard personnel would be deployed to support COVID-19 testing sites and help with patient transport.

Montgomery County officials, though, facing a severe shortage of bus drivers, submitted the request for assistance in addressing a bus driver shortage, which they attributed to COVID-19.

County officials told news outlets that dozens of routes were canceled on Wednesday.

Earl Stoddard, the county’s assistant CEO, said during the county council this week that the county was also exploring pulling employees from other jobs to drive buses but had not yet decided whether to do so, Stoddard added.

“We continue to look for help and assistance for MCPS, whether it’s substitute teachers or school bus drivers, nurses or school social workers,” Elrich said. “These are professionals; we can’t simply find any person off the street that perform. And there aren’t a lot of people out there who, even if they’re qualified who are looking to come back to work right now, apparently.”

Approximately a dozen schools in the county are conducting classes virtually because of COVID-19 outbreaks, though officials said during the meeting that their striving to keep schools open during the current wave, which is being driven by the Omicron variant of the CCP (Chinese Communist Party) virus.