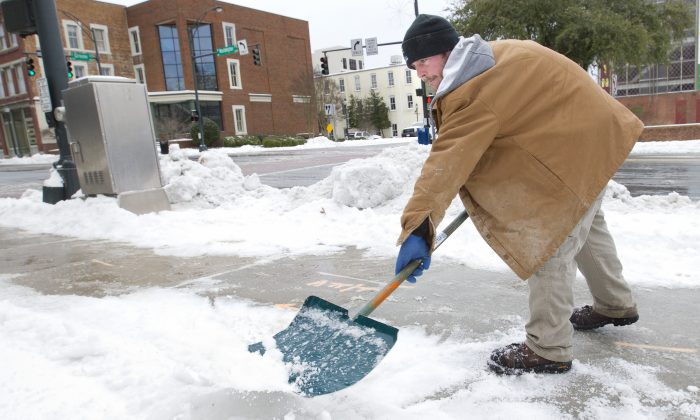 Chase Coble works a snow shovel on West Washington Street as city crews worked to clear downtown streets and sidewalks in the aftermath of the winter storm, on Saturday, Jan. 23, 2016, in Greensboro, N.C. (Joseph Rodriguez/News & Record via AP)
US

FORT WASHINGTON, Md.—Authorities in Maryland say a man shoveling snow has died after an apparent heart attack as a blizzard dumps snow on the mid-Atlantic region.

Prince George’s County Fire/EMS Department spokesman Mark Brady says paramedics were called to theFort Washington area around 10 a.m. Saturday for a report of a 60-year-old man who was shoveling and appeared to have a heart attack. Brady says medics were not able to revive the man and he died.

Brady had just sent out an advisory warning of the potential for heart attacks while shoveling. He urged people over 50 and those with heart conditions to get someone else to do the job, noting that the amount of snowfall associated with this storm will be particularly challenging to shovel.

HAYMARKET, Va.— Authorities are investigating the death of a Prince William County man who had been out shoveling snow during the weekend blizzard.

Police spokesman Jonathan Perok confirmed that a man in the Haymarket area died Friday night, but said there is no confirmation that his death is connected to overexertion from shoveling snow.

An autopsy will be conducted.

Doctors say shoveling snow can present a health risk to the elderly and those with heart conditions.