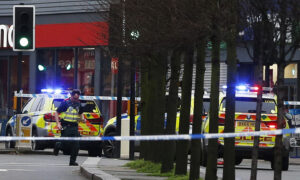 After Attack in London, UK Police Say Suspect Was Previously Convicted for Terrorism
0 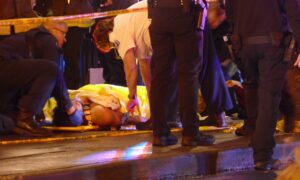 Men Wanted by Police in Seattle Shooting Arrested in Nevada
0 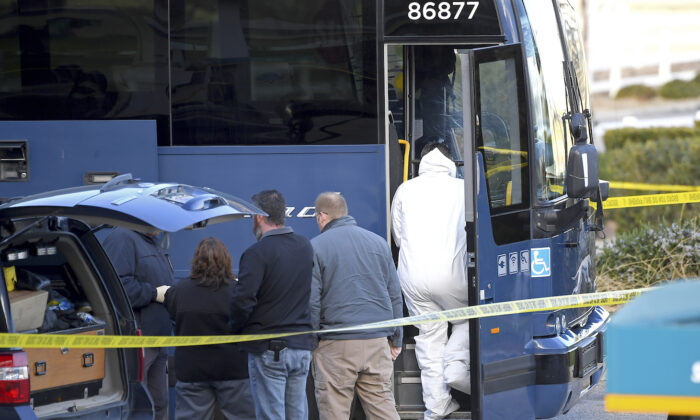 Investigators are seen outside of a Greyhound bus after a passenger was killed on board on Feb. 3, 2020 in Lebec, Calif. (Jayne Kamin-Oncea/AP Photo)
US News

LOS ANGELES—A gunman who killed a woman and wounded five others on a Greyhound bus in Southern California was cursing and muttering incoherently before the attack, passengers and authorities said.

Investigators are trying to determine a motive for the apparently random assault on Feb. 3 that left two people in critical condition.

Anthony Devonte Williams, 33, of Capitol Heights, Maryland, was arrested after passengers managed to disarm him and get him off the bus, California Highway Patrol Sgt. Brian Pennings said.

“There’s no indication that he knew anybody on there,” Pennings said.

Williams was booked at the Kern County jail on Feb. 3 on suspicion of murder and attempted murder and was held without bail. It wasn’t immediately known whether he had an attorney.

The packed bus was heading from Los Angeles to San Francisco when shots were fired at about 1:30 a.m. Feb. 3 on Interstate 5 near the small mountain community of Lebec, about 70 miles northwest of Los Angeles.

The driver and 42 passengers were aboard, including 6- and 8-year-old children who weren’t hurt.

Passenger Mark Grabban, 29, told The Associated Press that the gunman had been sitting with his leg sticking out into the aisle, muttering to himself incoherently.

“He was just saying weird stuff like ‘you don’t know me like that,’ ‘wait til we get to the station,’ ‘get away from the dude in the striped shirt,’” Grabban said in a series of Instagram messages.

Suddenly, the man started cursing and shooting, Grabban said. Grabban hid beneath the seat in front of him. He said the gunman fired eight or nine shots that “seemed to go on forever.” He added: “I was waiting for one to hit me.”

“I thought I was shot because I felt a rush of heat on the back of my head as I went down,” he said. “But I guess I just smashed my head on the seat as I went down to the floor.”

The driver had pulled to the shoulder of the freeway, where authorities said some passengers managed to get the man off the bus.

Passengers told Grabban someone wrestled the gun away from the shooter, but he didn’t witness it, he said.

Grabban said the driver of the stopped vehicle asked over the loudspeaker if anyone had been hurt and didn’t immediately pull away. “Everyone was screaming at him to drive off,” Grabban said.

The passengers gave first aid to the wounded as the driver continued to the next exit, where he pulled off at a gasoline station.

Meanwhile, CHP officers took Williams into custody on the road shoulder where he had been left.

The gun, a 9 mm semi-automatic pistol, and several ammunition magazines were found in the bus, Pennings said.

Grabban, who was sitting near the back of the bus with his girlfriend, said he had picked up the gun’s empty magazine clip and handed it to the driver. A casing ended up on Grabban’s lap, and he noticed a bullet hole in the floor next to him.

“I saw the blood on the floor of the aisle,” Grabban told NBC News. “I looked to the woman on the left, and she wasn’t responding, wasn’t moving or anything. She was lifeless.”

The dead passenger was a 51-year-old woman from Colombia, based on her passport, but her name wasn’t immediately released, Pennings said.

The remaining passengers were later driven to Northern California on another bus.

Authorities were looking into whether a video camera aboard the vehicle captured the attack when the bus was at the top of Tejon Pass. It rises to an elevation of more than 4,100 feet in Lebec.

Greyhound prohibits passengers from bringing guns, explosives, or dangerous chemicals on board its buses or in their luggage, according to its website. The company declined to answer additional questions about security on its buses.