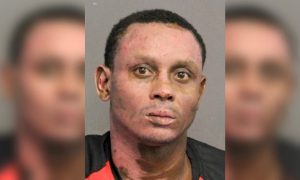 A Maryland man has been sentenced to 35 years in prison for throwing two Molotov cocktails at his ex-girlfriend’s apartment.

Darius Wilder, 41, will serve 35 years in a federal penitentiary followed by five years of supervised release for committing arson and for using a destructive device—a molotov cocktail—in committing the crime of firebombing his ex-girlfriend’s home.

Prosecutors said in a statement on March 18 that U.S. District Judge George J. Hazel handed the sentence to Wilder, of Silver Spring, following his August 2018 conviction.

“Darius Wilder is a violent criminal who used Molotov cocktails to commit arson in an attempt to seriously injure his ex-girlfriend, her children, and endanger the surrounding community,” said ATF Special Agent in Charge Rob Cekada. “We are glad to see that justice has been served.”

Investigators found two incendiary devices after firefighters responded to the blaze Wilder started at a Gaithersburg apartment on April 15, 2017, according to the U.S. Attorney’s Office statement. Crews from the Montgomery County Fire and Rescue Services extinguished the fire, which had been set on the apartment balcony.

The investigation established that one of the Molotov cocktails had been thrown onto the balcony of the apartment and damaged the wooden decking and children’s bikes. Police found the second incendiary device on the ground below. Investigators later confirmed that the bottles and wick material found in the dump had traces of gasoline.

The firebombing victim had tried to end a relationship with Wilder, but he kept trying to contact her, according to the U.S. Attorney’s Office statement.

In February 2017, Wilder threatened to set himself on fire and sent photographs showing a gas can and a lighter with a flame.

Evidence heard at Wilder’s trial showed that on several occasions in March 2017, he loosened and removed lug nuts from the wheels on the woman’s car. Later that same month, she found broken glass in front of her tires.

Google searches on Wilder’s phone showed that on March 18, he searched for images of gas lines and brake lines for the woman’s car.

On the day of the firebombing, Wilder texted and called the woman over and over again.

‘Could Have Killed All the Residents’

The woman whose residence Wilder targeted in the attack lived there with her three children.

“The evidence at trial proved that Darius Wilder attempted to firebomb his ex-girlfriend’s apartment,” said U.S. Attorney Robert K. Hur. “This kind of violence will not be tolerated. If he had been successful in starting the fire, Wilder could have killed all of the residents of the apartment complex where the victim resided, including the woman and her three children.”

Witnesses said that on April 18, 2017, law enforcement saw Wilder leave his home carrying a cooler with a black trash bag on top. Wilder got into his vehicle and drove away.

When authorities tried to stop him, he rammed a police vehicle and ran away. Police then pursued and arrested Wilder.

Police searched Wilder’s car and found three lighters, a black plastic bag with a gas can with gasoline, a 48-quart red cooler, a backpack containing a composition book and a tire iron.
Wilder admitted that he had filled a gas can at a gas station nearby, moved the gas into the bottles and then put the bottles together on the side of the house.

“We are all safer with Darius Wilder removed from the community for 35 years in federal prison, where there is no parole—ever,” Hur said in a statement.