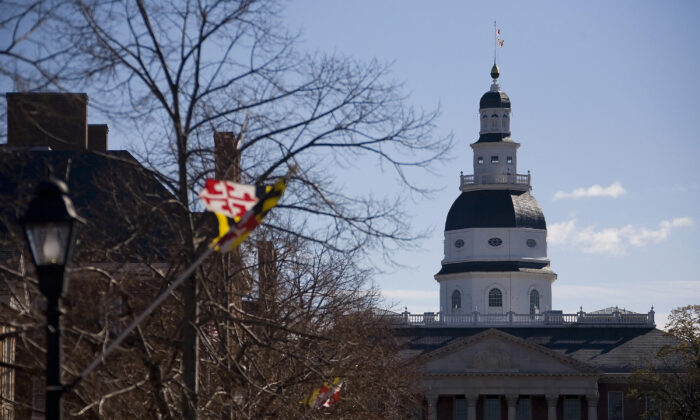 The Maryland State Capitol Building in Annapolis, Md., in a file image. (Jim Watson/AFP via Getty Images)
US News

Lawmakers in Maryland have approved a congressional map to replace a version deemed unconstitutional by a judge, even as the state’s attorney general is appealing the judge’s ruling.

Both chambers of the Maryland General Assembly this week approved the new map, contained in Senate Bill 1012. The state Senate passed the measure 30–10 and the state House of Delegates passed it 94–41. Most lawmakers who supported the legislation are Democrats; most Republicans remained unsatisfied and opposed it.

Anne Arundel County Senior Judge Lynne Battaglia ruled on March 25 in favor of two groups that sued over the previous map, finding that it was unconstitutionally aimed at reducing the power of Republican voters because it shifted the only Republican member of Congress representing Maryland, Rep. Andy Harris, into a different district, where he was likely to lose.

The map was a “product of extreme partisan gerrymandering,” according to Battaglia.

Lawmakers, facing a March 30 deadline to enact a new map, introduced one on March 28 (pdf) and passed it after airing supportive and opposition views in Annapolis.

“This map makes every effort to meet the judge’s requirements in the order. It is a map that I think the people of Maryland can be proud of,” House Majority Leader Eric Luedtke, a Democrat, said before the vote.

Sparring with critics, including one that asked about communities of interest allegedly not being placed in the same districts, Luedtke said Battaglia outlined a number of requirements and that “you can’t meet every possible criterion all at once.”

“The maps are prettier, but they still violate the constitution of Maryland. They’re still engaging in extreme gerrymandering,” Del. Mark Fisher, a Republican, said prior to the vote.

In a statement to media outlets, Doug Mayer, spokesman for Fair Maps Maryland, one of the groups that successfully challenged the previous map, said: “Hypocrisy continues to reign supreme in the Maryland General Assembly.

“On the same day they pass court-ordered new maps, they are still clawing with their fingernails to hold on to one of the most gerrymandered maps in the history of this country. Apparently, voter suppression is a hard habit to kick.”

Boundaries in the approved version would make the race for one of the Democrat-held seats more competitive, according to political experts. The seat representing Maryland’s 6th Congressional District is held by Rep. David Trone, a Democrat, who said in a statement that he didn’t disagree, but that he would do “everything in my power to retain the seat.”

The new map was approved on the same day that Maryland Attorney General Brian Frosh, a Democrat, filed an appeal to Battaglia’s ruling.

Battaglia is expected to review the new version in a hearing on April 1.

Gov. Larry Hogan, once presented with the new map, can sign it or veto it.

Hogan, a Republican, had urged lawmakers to adopt a map drawn by a commission he created, but they declined.