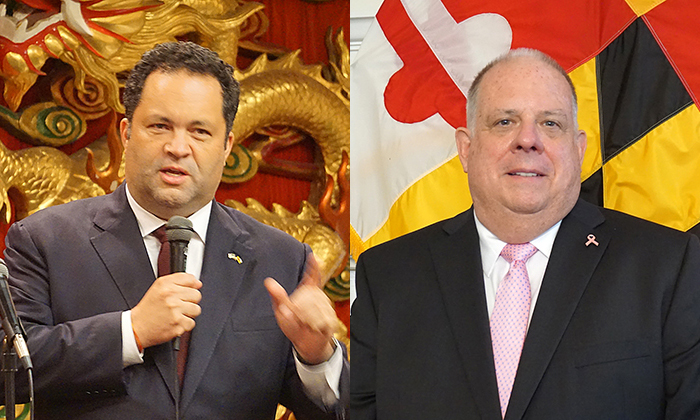 In just under four weeks, Maryland voters will head to the polls to select who will be governor come January. They can either re-elect Republican Larry Hogan to another four-year term, or elect Democrat Ben Jealous, an entrepreneur and former president of the NAACP.

Epoch Times media partner NTD sat down with Jealous at a Chinese restaurant in Gaithersburg, where he was meeting with Asian community leaders, and with Hogan, at the State House in Annapolis, for one-on-one interviews. Both candidates were asked about two issues that are of great importance to Americans: education and jobs. Here’s what the candidates had to say.

Both candidates agree a strong educational system is key to Maryland’s success.

Jealous had harsh words for the current governor, saying the state’s schools have fallen in national rankings over the past four years.

Maryland has dropped one place each year in Education Week’s annual rankings since 2014. While in 2014, Maryland ranked second nationally with a score of 83.1, the state has since slipped to sixth in the 2018 report, with a score of 82.4.

During his four years in office, Hogan has committed $25 billion to K-12 education, more than any other Maryland governor in history. Maryland currently spends $13,075 per pupil, the 19th-highest in the country.

Jealous sees such fixes as raising teacher pay by 29 percent by 2024 and adding pre-kindergarten for all to Maryland schools. Hogan wants to add more accountability.

Hogan said he’ll push for further accountability in a second term, including legislation that would create a state education investigator general’s office. The General Assembly voted down such a measure this year.

A good education should lead to good jobs, and both candidates want to see growth.

As an entrepreneur, Jealous sees small businesses, tech startups, and the IT industry as the key to that growth.

Jealous claimed the state has lost 50,000 jobs to Virginia, a statistic that The Epoch Times was unable to confirm. The Bureau of Labor Statistics shows a job gain of 114,000 since January 2014.

While Maryland is part of a growing metro-area tech sector, Jealous says the state is losing out to Virginia. In a Kauffman Index report measuring entrepreneurship growth, Virginia ranked first, with Maryland third, even as Maryland’s rate of startup growth was 10 percent higher. A separate report measuring the rate of new entrepreneurs showed Maryland ranks two spots higher than Virginia.

Jealous wants to put more emphasis on tech entrepreneurs by creating an Office of Tech Transfer inside the governor’s office. His policy proposal seeks to create a one-stop shop for tech-focused entrepreneurs and startups. Maryland currently has a Technology Development Corporation that does something similar, but isn’t part of the governor’s office.

“Maybe we aren’t bragging enough, but we actually have more IT companies and more IT jobs than Virginia does,” Hogan said. He said Maryland could hire an additional 80,000 to 100,000 IT jobs, but candidates lack the proper training.

On the small-business front, Jealous believes extra protections are needed to watch over the owners of those companies.

“We need to make sure we have a small-business owner’s bill of rights, so small-business people know Maryland is the best place to grow your business,” Jealous said.

According to Jealous’s policy proposal on his website, it “will codify protections and recourse for small businesses against unscrupulous behavior.” The proposal offers few details other than promising to create a level playing field.

Hogan, who was himself a small-business owner prior to becoming governor, said he believes his tax cuts have helped create a more business-friendly state and created more jobs.

“I’m very proud we are No. 1  in America for small and minority-owned businesses,” Hogan said. “That is one thing we will continue to focus on.”