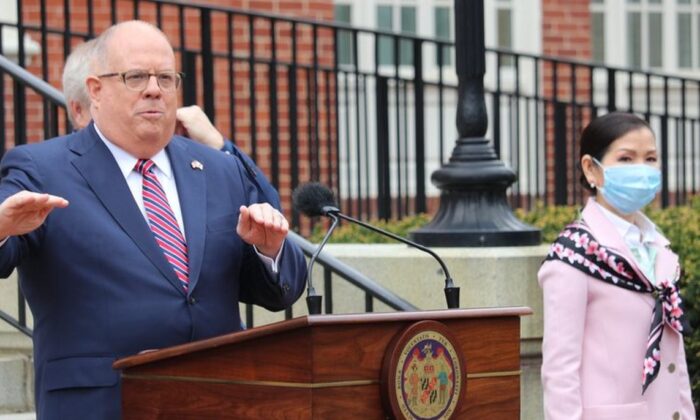 Maryland Gov. Larry Hogan speaks at a news conference in Annapolis, Md. on April 20, 2020, with his wife, Yumi Hogan (R), where the governor announced Maryland has received a shipment from a South Korean company to boost the state's ability to conduct tests for COVID-19 by 500,000. (AP Photo/Brian Witte)
AMERICA

Maryland Gov. Larry Hogan said Thursday that hundreds of thousands of CCP virus tests that were bought from South Korea are being protected by the state’s National Guard in an unnamed location.

“We spent about 22 days and nights dealing with this whole transaction with Korea. We dealt with the Korean Embassy, folks at the State Department … and our scientists on both sides trying to, you know, figure out these tests,” Hogan told the Washington Post on Thursday. “And then at the last moment, I think 24 hours before, we got the sign-off from the FDA and Border and Customs, to try to make sure that we landed this plane safely,” he continued, referring to the Food and Drug Administration.

He noted that the federal government seized about 3 million N95 masks that were purchased by the state of Massachusetts in March. That’s why, Hogan asserted, Maryland took extra steps to secure the state’s order of 500,000 testing kits.

“That was so important to us that we wanted to make sure that plane took off from Korea safely, landed here in America safely and that we guarded that cargo from whoever might interfere with us getting that to our folks that need it,” he said in the interview.

Elaborating further, the governor said state officials landed at the Baltimore-Washington International Thurgood Marshall Airport rather than Dulles Airport, adding that “this was an enormously valuable payload. It was like Fort Knox to us, because it’s going to save the lives of thousands of our citizens.”

When he was asked by the Washington Post interviewer about whether the National Guard is deployed to protect the tests, Hogan replied: “They are.”

“The National Guard and the State Police are both guarding these tests at an undisclosed location. These things are being distributed; they’re helping us distribute the tests,” he said.

His comments come as the FDA on Friday approved the state’s use of the 500,000 South Korean-made CCP (Chinese Communist Party) virus tets.

The FDA’s chief scientist gave the emergency approval to the South Korean firm LabGenomics Co in a letter Wednesday, according to The Associated Press.

Spokesman Mike Ricci said Thursday that Maryland was increasing its supply of such materials. He said the state was set to receive about 34,000 swabs from a national stockpile and had an “adequate supply” of reagent, a mixture used for chemical analysis in the testing.

He added that LabGenomics was given preliminary approval to use the tests last week and some have been since been deployed to “high-priority hot spots” including nursing homes, drive-thru sites, and a testing site for poultry plant workers in Salisbury.