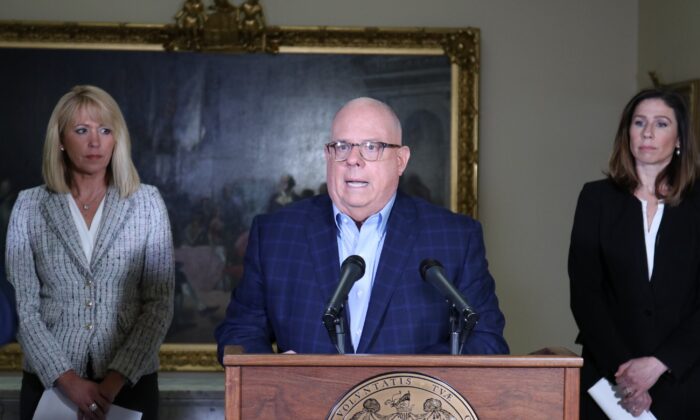 Maryland Gov. Larry Hogan signed an executive order on March 30 requiring state residents to stay at home except for essential trips, due to spread of the CCP virus, warning violators they could be punished with a jail sentence of up to a year.

“We are no longer asking or suggesting Maryland residents stay home, we are directing them to do so,” Hogan said. “People are not locked in their homes,” he added later.

Any person knowingly or willingly violating the order is guilty of a misdemeanor and, upon conviction, is subject to imprisonment of up to one year, Hogan said. Fines of up to $5,000 can be levied.

Marylanders who have left the area should self-quarantine where they are for 14 days.

The order allowed essential businesses to stay open, but they should take steps to scale down operations to limit interactions among staff and the public and implement telework as much as possible.

“Marylanders need to know that, unfortunately, we are only at the beginning of this crisis. And it is going to get considerably worse before it gets better,” Hogan said.

The number of confirmed CCP (Chinese Communist Party) virus cases in Maryland rose to 1,413 on March 30. The death toll tripled over the weekend to 15, and a new cluster of cases broke out at a nursing home in Carroll County.

The virus can cause severe illness or death, primarily among the elderly and those with underlying health conditions.

Officials said the fact that no vaccine or proven treatment exists for the new illness factored into the decision.

“Don’t go out. Only take a walk by yourself or the people that you live with, for a short time,” Deputy Health Secretary Fran Phillips said.