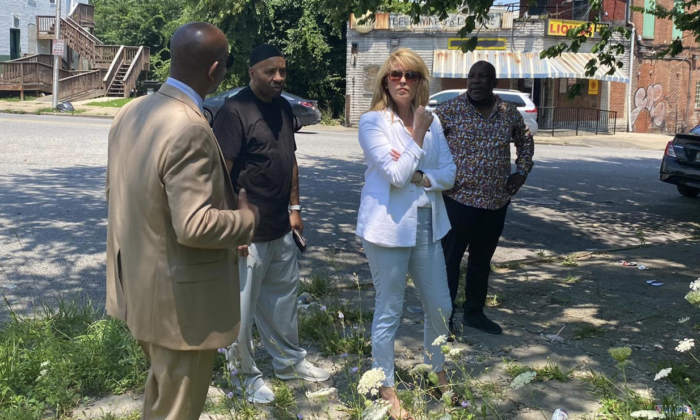 Maryland Republican gubernatorial candidate Kelly Schultz meets with residents in Baltimore’s Rosemont neighborhood on July 12, touting her plan “to get these streets safe again,” which is “the quickest way to get businesses back, the quickest way to get people good-paying jobs, and to give people opportunities to succeed.” (Courtesy of Kelly Schulz for Governor)
2022 Midterm Elections

During and after President Donald Trump’s tenure in the White House, there was no love lost between Trump and Maryland Gov. Larry Hogan, who was and remains among the former president’s most outspoken critics from within the Republican Party.

With Hogan term-limited and reportedly pondering a run for the presidency himself, that enmity has carried over into Maryland’s July 19 Republican gubernatorial primary to select the party’s candidate to succeed the popular governor—a Republican twice-elected to lead a Democrat-dominated state.

There are four candidates on the Republican gubernatorial ballot, but the contest boils down to a two-way battle between Hogan-backed Kelly Schulz—a moderate who served in his cabinet as labor secretary and commerce secretary—and Trump-endorsed state Del. Dan Cox—a conservative attorney who sponsored a failed bid to impeach the governor in March.

The winner of what’s projected to be a tight race between Schultz and Cox in November will face the Democrat who emerges victorious from their nine-candidate primary.

With the state’s July 7–July 14 early voting period drawing to a close, turnout for primary elections has been light, according to the Maryland State Board of Elections (MSBE). The state’s primary slate includes inter-party races for governor, attorney general, comptroller, one U.S. Senate seat, eight U.S. House seats, and state legislature and local races.

For the 2022 midterm primaries, more than 500,000 Marylanders have requested mail-in ballots, with about 115,000 having been returned by July 12, according to the MSBE.

Maryland law prohibits counting mail-in votes until the Thursday after Election Day. Conclusive results won’t be available until that day at the earliest, with late-counted ballots likely to determine the winner in the Schultz–Cox race and many other primary contests.

A Goucher College Poll of 414 Republican voters, conducted from June 15 to June 19 and published on June 28 shows Cox garnering 25 percent of the vote and Schulz 22 percent. Nearly half of those surveyed were undecided, and many who favored a candidate said they could change their minds by Election Day.

Cox, 47, worked as a Christian school teacher and real estate agent before earning a law degree from Regent University. His law firm sued Hogan over his COVID-19 restrictions and represented a man who sued local officials for arresting him for not wearing a mask at a polling site.

He ran for the U.S. House in 2016, losing the Maryland Congressional District 8 election to Rep. Jamie Raskin (D-Md.), who was the lead impeachment manager for the second impeachment of President Donald Trump in 2021 and now sits on the House Select Committee to Investigate the January 6th Attack on the U.S. Capitol.

Cox was elected as a delegate to a four-year term in the Maryland General Assembly in 2018, where he’s regarded as one of its most conservative lawmakers, sponsoring stymied legislation seeking to protect the unborn from abortion, limit the governor’s emergency powers, protect second amendment rights, and require schools to provide parents with information about the health and well-being of their children.

His campaign platform states that if elected, he will file legislation restricting more abortions, banning mask and vaccine mandates, eliminating rights that discriminate based on gender, and authorizing a federal audit of the 2020 election.

He chartered buses to Washington for the Jan. 6, 2021, rally and, during the Capitol protest, called Vice President Mike Pence “a traitor” in a Twitter post he later deleted.

In March, Cox accused Hogan of malfeasance in office, theft of “the people’s liberty and property,” and “deprivation of the religious liberties of the people” in a measure to initiate impeachment proceedings. It was never heard.

Cox’s campaign has only raised about $188,000, according to the MSBE—four times less than Schultz’s. But he has received significant publicity boosts from Trump, who hasn’t just endorsed him but has been actively monitoring the campaign.

In a July 12 statement, Trump said: “Dan Cox is doing a great job running for Governor of Maryland. He will bring dignity back to a State that is much more ‘red’ than anyone would ever know or believe. Dan will fight for our schools, our jobs, and our entire way of life. More importantly, Dan will end Larry Hogan’s terrible RINO reign by defeating his ‘Never Trump’ successor, another low-energy RINO, Kelly Schulz.

“Dan will do an amazing job restoring FREEDOM to a shutdown Maryland. Hogan is one of the worst in the Country, governed more like a Democrat than a Republican, cheated with South Korea on the Covid tests, and locked everything up with really bad results. Dan Cox is a terrific guy with a beautiful family. He has my Complete and Total Endorsement!”

Trump also called into a July 13 “tele-rally” on Cox’s behalf.

From Bartending Student to Secretary of Commerce

Schulz, 53, worked as a waitress and a bartender before earning a bachelor’s degree in political science at Hood College in 2006. After serving as a Maryland House Republican Caucus aide, she was appointed to a position in the U.S. Environmental Protection Agency under President George W. Bush.

Elected to the Maryland House in 2010, she was appointed by Hogan to his cabinet as the state’s secretary for the department of labor, licensing, and regulation. She later served as the state’s secretary of commerce, where she worked to keep businesses operating during the COVID-19 pandemic and launched Maryland’s “Innovation Uncovered” initiative.

Regarded as the “establishment candidate,” Schultz touts Republican “traditional values.” She has vowed to expand school choice, repeal a state tax that links gas taxes to inflation, and “treat criminals like criminals.” In recent days, she has introduced a “parental bill of rights,” promising to keep “schools open” and “masks off.”

“Maryland parents deserve to have a voice in their child’s education, and all students, regardless of their zip code, deserve a world-class education,” she wrote in a July 13 Twitter post. “That’s why I have a ‘Parental Bill of Rights,’ it is about empowering parents and giving every single child a chance to succeed.”

The only woman in Maryland’s crowded gubernatorial race, Schulz would be the state’s first female governor if elected. She has touted her capacity as Hogan’s protégé to work with Democrats and independents in deep blue Maryland to get things done.

Her campaign has called Cox “unstable” and “unfit for office,” citing Hogan’s 2021 claim that he’s a “QAnon whack job.” She has maintained that Cox would be routed in a general election, alleging that Democratic groups are contributing to his campaign to ensure an unelectable Republican is on the November ballot.

As of early July, her campaign has raised more than $800,000—nearly as much as her three opponents combined. Her lieutenant governor running mate is Dr. Jeff Woolford, who served 30 years in the U.S. Air Force as an aircraft mechanic, fighter pilot, and flight surgeon. An Afghanistan combat veteran, he’s a Maryland Air National Guard colonel.

Another Attorney and a Democrat

The other two candidates in the Republican gubernatorial primary are Robin Ficker and Joe Werner.

Ficker, 79, has been a perennial candidate for local and state offices since running for Congress in 1972. He served in the Maryland House between 1979 and 1983.

An attorney since 1973, Ficker’s first case went to the U.S. Supreme Court seeking to end the National Football League’s blackout of sold-out home football games. He was disbarred from practicing law earlier this year by the state’s Attorney Grievance Commission for failing to appear for trial.

Werner, 62, an attorney, has run for local and state offices as a Democrat three times since 2014. He’s campaigning for the first time as a Republican.