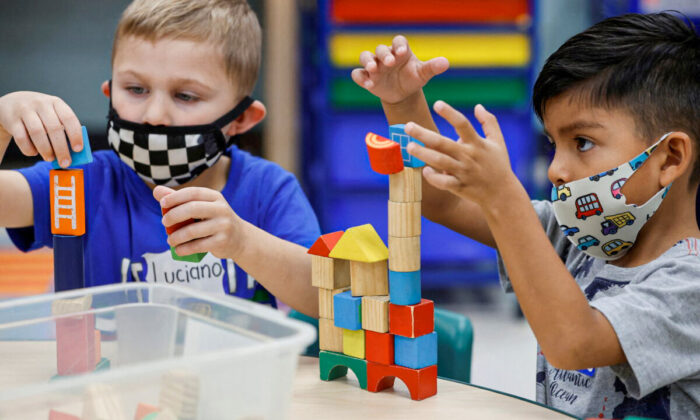 Children wear masks in a school in a file image. (Jonathan Ernst/Reuters)
AMERICA

Maryland’s Board of Education on Feb. 22 voted to lift the statewide mask mandate it imposed in 2021.

Members voted 12–2 to rescind the mandate.

Authorities noted that COVID-19 cases, hospitalizations, and deaths are declining nationwide as well as in Maryland, that COVID-19 vaccines are available to all Americans 5 and older, and that there has been an increase in COVID-19 treatments.

“The conditions are better, there’s more testing, there’s more vaccines that are readily available,” Maryland State Superintendent Mohammed Choudhury told the board before the vote. “My stance is it’s time to give it back to local control so they can make the responsible decision.”

Several members said they wanted the board to postpone the vote over concerns metrics could bounce back up in the coming weeks.

“I have a responsibility to be prudent, and I just feel like we’re, like, a couple of weeks too early, and a couple more weeks, and we would know for sure that we’re going to stay down,” Rachel McCusker said during the meeting.

But Vermelle Greene, another member, said that local officials should be able to decide whether to require masks.

“I understand that people may be concerned about the health metrics and this kind of thing and that is important as well. However, we have 24 local school districts. And they are led by very intelligence superintendents, very intelligent board members, just as intelligent as we are. And I would like to think and I believe that they would take the same steps to protect their children as we would if we were looking at all the 900,000-plus children of the state. I firmly believe that local control needs to be returned to the districts,” she said.

The mandate will remain in place until the General Assembly’s Joint Committee on Administrative, Executive & Legislative Review holds a hearing and then votes on whether to withdraw it.

Maryland Gov. Larry Hogan, a Republican, had urged the state school board to vote to rescind the policy.

“This action aligns with the data and the science, the recommendation of the state superintendent of schools, and the guidance of medical professionals across the country,” Hogan said in a statement. “I also want to express my sincere appreciation to all the parents who have spoken out in recent weeks. At a time when Maryland has the lowest COVID-19 metrics in the country, this is a major step for normalcy and the well-being of our students. The General Assembly must now act swiftly to ratify the state board’s decision.”